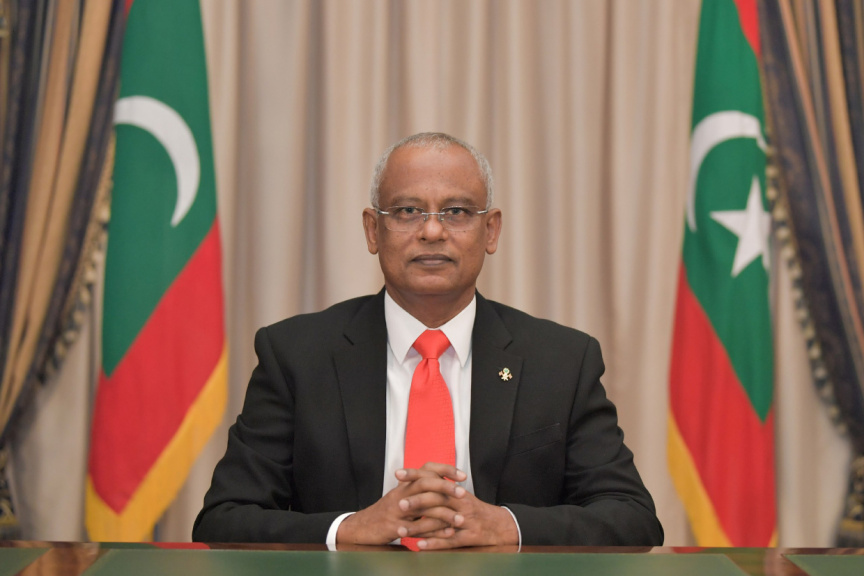 President Ibrahim Mohamed Solih during the Presidential address to the nation on the 54th Independence Day of Maldives. (Photo/President's Office)

President Ibrahim Mohamed Solih has stated that the Maldives as a country will never forego its land no matter how small during his presidency, to a foreign power despite its wish for progress and prosperity in the country.

Addressing the nation on the occasion of the 54th Independence Day of Maldives, President Solih said the true purpose of independence was to attain development in every area and becoming sufficient economically. He also accepted that there was a lot of work to be done for the prosperity of the country, but no matter how desirable it may be, he vowed to never give up even a meager amount of land to a foreign power to gain development.

“My wish to bring prosperity to the country, will not see me give up even a small piece of land of this beloved country to a foreign power for a temporary benefit. It is something that cannot be measured in money or goods. The respect we have for this archipelago if far higher,” said President Solih.

He also warned that Maldivians should be wary of the threat to the country’s independence from the radical and extremist clouds rising on the horizon rather than from swords and guns.

“The factors that we should be aware of when it comes to independence has changed. It is no longer wars that are conducted with guns, swords, and spears that threaten it, but rather the ideological tides that have changed. The different extremist and radical views and beliefs that have started to cloud the horizon, that is the real threat,” said the President.

He stated that the ideology to not acknowledge, respect and tolerate the beliefs and views of others is the meaning of radicalization and that it was when a person believes that there is no other way but his or hers that must be followed. President Solih stressed that this is something that Maldivians should keep rejecting.

“Independence in its full form can be experienced by having the guarantee that the desired dreams of the people will be brought to reality while under the shade of the faith of Islam and the laws of Maldives. It is each and everyone’s responsibility to ensure that such an environment is built” said the President.

President Solih also stated that as the country sets out into yet another new year of independence, the most important focus of the current government was to shape a safe, peaceful and harmonious society that was full of happy and proud families. The president then spoke of the individual independence which can only be felt when the economic benefits from the sea, air, reefs, and lagoons of this country by its citizens and when justice and the rights of these citizens are also guaranteed.

In his speech, President Solih also asserted that the main goal of every institution of the government, institutions related to security and safety as well as the media and press and every other organization should be on protecting the individual independence and rights of the people.

“The government’s aim regarding independence is to fully empower the people and elevate their voices, and the government is vying to erase or amend laws and regulations that infringe these rights,” said President Solih.

“I wish for the wellbeing of the people and with that thought in mind, I ask everyone to work for the development and advancement of the country. To establish justice, I urge people to say no to corruption and bribery. We will advance and develop this country together. This is our country,” the President said in concluding his address.