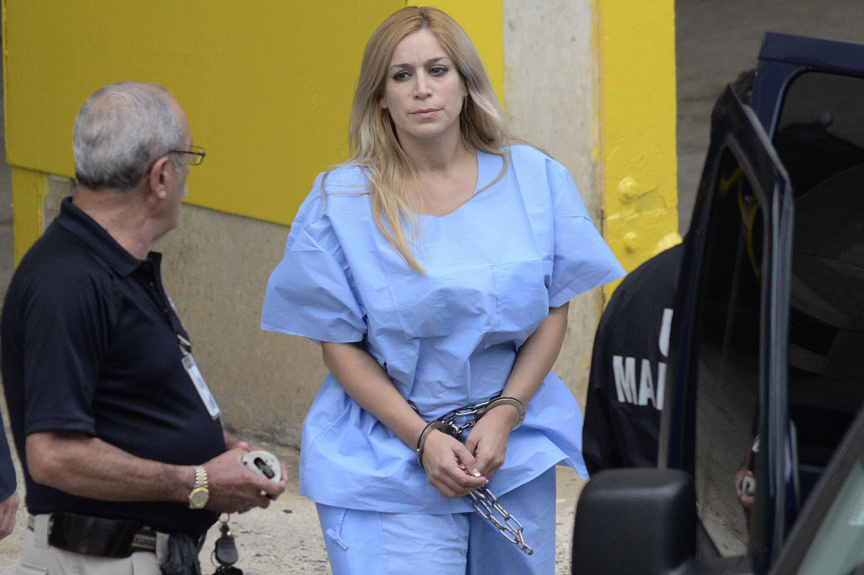 This Sept. 24, 2015 file photo shows Aurea Vazquez Rijos, who was accused more than a decade ago of the murder of her wealthy husband, Canadian Adam Anhang, in San Juan, Puerto Rico. (Carlos Giusti/El Vocero via AP File)

SAN JUAN, Puerto Rico (AP) — A Puerto Rico woman found guilty of hiring a hit man to kill her wealthy Canadian husband more than a decade ago was sentenced to life in prison on Friday.

Aurea Vazquez Rijos cried as a federal judge issued the sentence and ordered that she be transferred to a prison in Fort Worth, Texas. Judge Daniel Dominguez said he believed the jury's guilty verdict over Vazquez's statement that she is innocent.

Her defense attorneys plan to appeal in a case that sparked an international manhunt.

Vazquez had been charged with offering a man $3 million to kill real estate developer Adam Anhang. The 32-year-old was stabbed repeatedly and hit in the head with a cobblestone while walking with Vazquez through the historic part of Puerto Rico's capital in September 2005, just 12 hours after prosecutors said Anhang had asked for a divorce.

During the sentencing, which was held at a federal courthouse near where Anhang was killed, his mother and younger sister read statements.

"It certainly helps to put it behind us, but you can't forget your own child who dies before you do," the victim's father, Abraham Anhang, told The Associated Press. "If you lose a child, there's never closure."

As Abraham Anhang left the courtroom, Vazquez asked him, "Are you happy now?" to which he replied, "Shut up."

Vazquez and Anhang had signed a prenup one day before getting married, with Anhang's value estimated at more than $24 million and Vazquez's at nearly $62,300. Six months after Anhang's death, Vazquez sued his parents seeking $1 million in damages and $8 million from his estate.

She then left for Florence, Italy in 2008 and was arrested in June 2013 after flying from Italy to Spain. She and her one-month-old baby were extradited to Puerto Rico two years later, leaving behind twin daughters she had with a man in Italy.

Also sentenced to life Friday was Vazquez's sister, Marcia Vazquez Rijos and an ex-boyfriend of hers, Jose Ferrer Sosa. All three had been found guilty in October last year.

"Today's sentence concludes a process which required a lot of effort and perseverance. Justice was finally served for the victim and his family," U.S. Attorney Rosa Emilia Rodriguez said in a statement.

Another man was initially convicted in the killing and spent eight months in jail before being released as Pabon was charged when federal authorities took over the case.