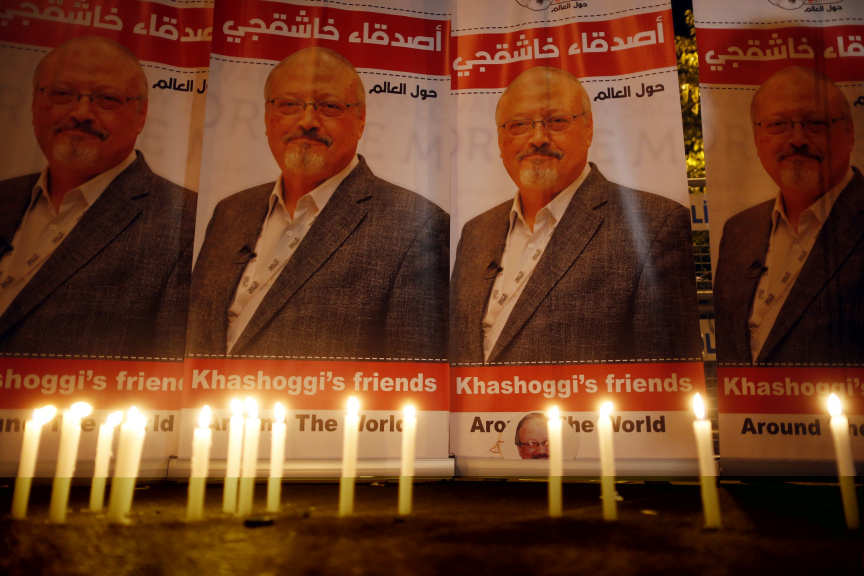 In this Oct. 25, 2018, file photo, candles, lit by activists, protesting the killing of Saudi journalist Jamal Khashoggi, are placed outside Saudi Arabia's consulate, in Istanbul, during a candlelight vigil. (AP Photo/Lefteris Pitarakis, File)

DUBAI, United Arab Emirates (AP) — Several activists imprisoned in Saudi Arabia since May, including a number of women who campaigned for the right to drive, have been beaten and tortured during interrogation, Amnesty International said Tuesday.

Saudi Arabia has detained at least 10 women and seven men on vague national security allegations related to their human rights work. Those detained include Loujain al-Hathloul, Eman al-Nafjan and Aziza al-Yousef, who had campaigned for the right to drive before the decades-long ban was lifted in June.

Amnesty said that according to three testimonies it obtained, some of the activists were repeatedly tortured by electrocution and flogging, leaving some unable to walk or stand properly. In one instance, an activist was hung from the ceiling. Another testimony said one of the detained women was subjected to sexual harassment by interrogators wearing face masks.

The kingdom is at the center of an international firestorm after the brutal killing of Saudi journalist Jamal Khashoggi, who had written critically about Crown Prince Mohammed bin Salman's crackdown on dissent, including the arrests of the women activists. Khashoggi was killed and then dismembered by Saudi agents in the kingdom's consulate in Istanbul on Oct. 2.

"Only a few weeks after the ruthless killing of Jamal Khashoggi, these shocking reports of torture, sexual harassment and other forms of ill-treatment, if verified, expose further outrageous human rights violations by the Saudi authorities," said Lynn Maalouf, Amnesty's Middle East research director.

Some of the imprisoned activists were unable to walk or stand properly, had uncontrolled shaking of the hands and marks on their bodies. One of the activists reportedly attempted to take her own life repeatedly inside the prison, Amnesty said.

Al-Hathloul, an activist in her late 20s, was held in solitary confinement for around three months after her May arrest, a person close to her told The Associated Press.

Some of the men detained in that sweep include Mohammad al-Rabae, a writer and activist, and Ibrahim al-Modeimigh, a human rights lawyer who defended al-Hathloul in court when she was arrested in 2014 and held for more than 70 days for attempting to drive from the UAE to Saudi Arabia.

Also imprisoned is Samar Badawi, whose brother Raif Badawi is serving 10 years in prison and was publicly flogged in 2015 on charges related to blog posts that were critical of the kingdom's ultraconservative clerics. Others detained include Nassima al-Sada, a rights activist from the Eastern Province, and Hatoon al-Fassi, an esteemed professor of Gulf history who was recently announced as the recipient of the Academic Freedom Award by the Arizona-based Middle East Studies Association.

Nearly all the women detained are mothers or grandmothers and well-known in their fields of work. A few of those initially detained were in their 70s and have since been released.

Some of the women detained were at the forefront of calls to lift guardianship laws that give male relatives final say on whether a woman can marry, obtain a passport or travel.

Dana Ahmed, a researcher at Amnesty, told the AP that Saudi authorities have yet to charge any of them. She said the crackdown that began in May targeted human rights defenders, including many who had been silent for years and had previously been persecuted for their human rights work.

85,000 children may have died of hunger in Yemen