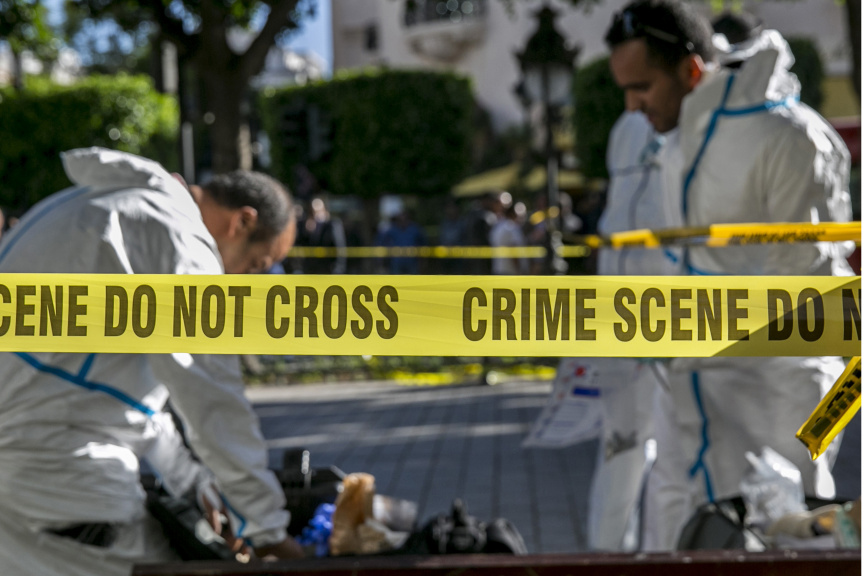 Tunisian forensic experts work on the scene of an attack after a 30-year-old woman blew herself on the Habib Bourguiba avenue in Tunis, Tunisia, Monday, Oct. 29, 2018. (AP Photo/Riadh Dridi)

The 30-year-old woman set off the blast in Tunis just before 2 p.m. (1300 GMT) on Habib Bourguiba avenue, the Interior Ministry said.

The bomber, who wasn't previously known to authorities, blew herself up near a police patrol, a ministry statement said. It said eight police officers and one civilian were wounded. Apart from the bomber, there were no further reported deaths.

An AP reporter at the scene saw ambulances arriving to take the wounded to hospitals. The avenue, as well as several adjacent streets, was cordoned off by police. Habib Bourguiba avenue is considered the cultural, political and economic heart of Tunis — and is sometimes called Tunisia's Champs Elysees.

Tunisian radio station Mosaique FM said the attacker was wearing a homemade bomb belt with a small quantity of explosives. The station cited a security source it did not name. The bomber's body appeared largely intact after the explosion.

Tunisian President Beji Caid Essebsi called the bombing a terrorist attack, in comments reported from Germany, where he was attending an investment conference.

There were no immediate claims of responsibility.

Mosaique FM said the bomber came from the Mahdia region of eastern Tunisia and that security services raided her home after the attack.

Tunisian authorities have been on high alert in recent years following a spate of attacks including a deadly shooting in Tunis' Bardo National Museum in 2015 in which 22 people, including many European tourists, died. Three months later, an Islamic extremist attack in the beach resort of Sousse killed 38 people, mostly British tourists.

In November that year, a suicide bomber blew himself up on a bus carrying members of the Tunisian presidential guard, killing 12 on a main Tunis road. The Islamic State group later claimed responsibility.