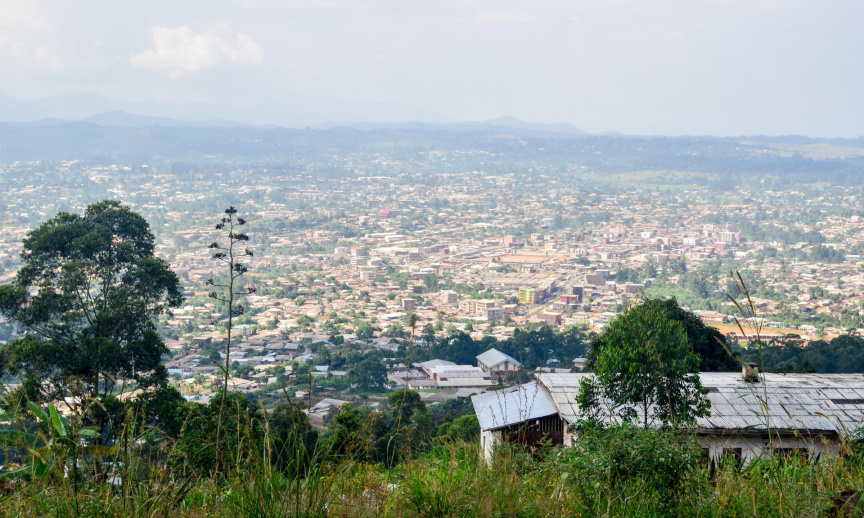 The students were taken from Nkwen, a village near the regional capital, Bamenda. (File Photo/Alamy)

North West Region Gov. Deben Tchoffo said the students abducted Sunday night were ages 11-17, and they were taken from Nkwen, a village near the regional capital, Bamenda, along with school staff that included the principal.

"It is rather unfortunate that this is happening, that 79 of our children and three of their staff can be picked up by terrorists," Tchoffo said. "We have asked our military to do everything and bring back the kids alive."

A video purporting to show the kidnapped students was posted on social media from a group of men who call themselves "Amba boys," a reference to the state of Ambazonia that armed separatists want to establish in Cameroon's Anglophone North West and South West regions.

In the video, men who identified themselves as the kidnappers forced several boys to give their names and those of their parents. The boys also said they were taken by the armed men late Sunday and didn't know where they were being held.

The men in the video said they would only release the students once the goal of creating a new state is achieved.

"We shall only release you after the struggle. You will be going to school now here," the men said. The video could not be independently verified, but parents said on social media they recognized their children in the recording.

Fighting between the military and separatists increased after the government clamped down on peaceful demonstrations by English-speaking teachers and lawyers protesting what they said were their marginalization by Cameroon's French-speaking majority.

Hundreds have been killed in the past year.

The separatists have vowed to destabilize the regions as part of the strategy for creating a breakaway state. They have attacked civilians who do not support their cause, including teachers who were killed for disobeying orders to keep schools closed.

There have been kidnappings at other schools, but the group taken Sunday was the largest number abducted at one time in Cameroon's Anglophone regions. The separatists also have set fire to at least 100 schools and driven out students and teachers from buildings taken over as training grounds.

"These appalling abductions show just how the general population is paying the highest price as violence escalates in the Anglophone region," said Samira Daoud, Amnesty International deputy regional director for West and Central Africa. "The abduction of schoolchildren and teachers can never be justified."

Amnesty International expressed solidarity with the students' families and demanded "that the Cameroon authorities do everything in their power to ensure all the pupils and school staff are freed unharmed."

Last week, separatist militants attacked workers on a state-run rubber plantation in southwestern Cameroon, allegedly chopping off their fingers because the men defied an order to stay away from the farms.

An American missionary also died in the North West region near its capital, Bamenda, when he was shot in the head amid fighting between separatists and soldiers.

The turmoil in Cameroon comes after President Paul Biya won a seventh term last month in an election the U.S. said was marked by irregularities. Biya, who has been in office since 1982, is set to be inaugurated Tuesday.

Minor arrested in connection to kidnapping of woman

US kidnapping suspect describes how he targeted victim