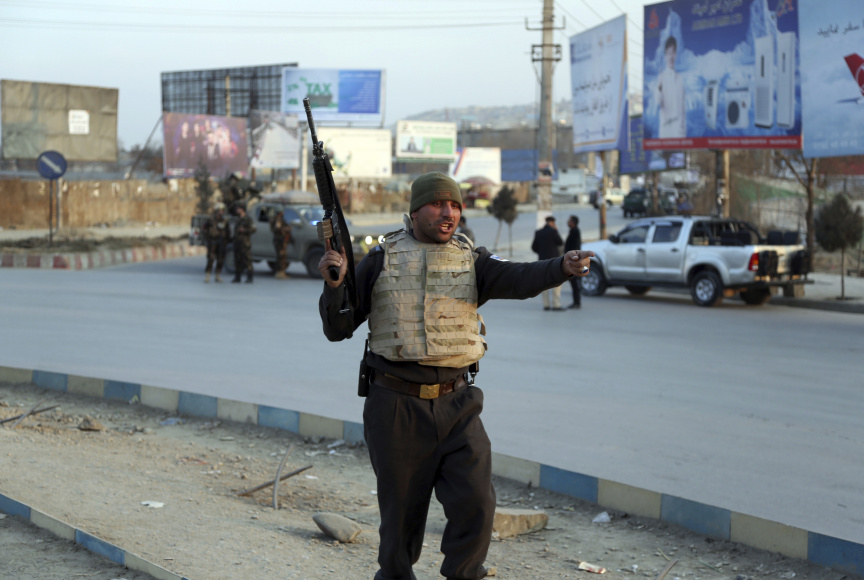 Afghan security forces arrive at the site of an explosion and attack by gunmen, in Kabul, Afghanistan, Monday, Dec. 24, 2018. (AP Photo/Rahmat Gul)

KABUL, Afghanistan (AP) — A suicide bomber and extremists armed with assault rifles and explosives attacked a government building in the Afghan capital in an eight-hour-long siege that left 29 people dead and more than 20 wounded, authorities said. It ended when the three gunmen were killed.

The attack began when the suicide bomber blew up his explosives-laden car in front of the multi-story building that houses a public welfare department in an eastern neighborhood of Kabul, Danish said. Minutes later, three gunmen entered the building and rampaged through the office complex hunting for victims. Some employees managed to barricade themselves inside offices while police quickly evacuated 357 people, officials said.

Witnesses reported hearing at least five explosions as police and gunmen traded fire. One officer died and three were wounded.

Police cordoned of the area as they tried to secure the building, but Danish said the operation was painstakingly slow as officers moved carefully from room to room and floor to floor.

Kabul police spokesman Basir Mujahid said authorities received at least one telephone call from inside the building, but frightened employees were unable to provide any details.

No one claimed responsibility, but both the Taliban and the local Islamic State affiliate have carried out brazen daytime attacks in the capital.

The building is in area that includes several apartment buildings as well Afghanistan's department for public works.

The attack came four days after U.S. President Donald Trump announced the withdrawal of half of the 14,000 American troops and just hours after Pakistan's Foreign Minister Shah Mahmood Qureshi was in Kabul to discuss a negotiated end to Afghanistan's 17-year war. Qureshi, who then continued his trip to Iran, condemned the attack.

Pakistan helped orchestrate last week's peace talks in the United Arab Emirates, where representatives from Saudi Arabia, the UAE, Pakistan and the United States met with the Taliban.

Taliban insurgents control nearly half of Afghanistan and are more powerful than at any time since a 2001 U.S.-led invasion. They carry out near-daily attacks, mainly targeting security forces and government officials.

The U.S. and NATO formally concluded their combat mission in 2014, but American and allied troops remain, conducting strikes on the Islamic State group and the Taliban and working to train and build the Afghan military.