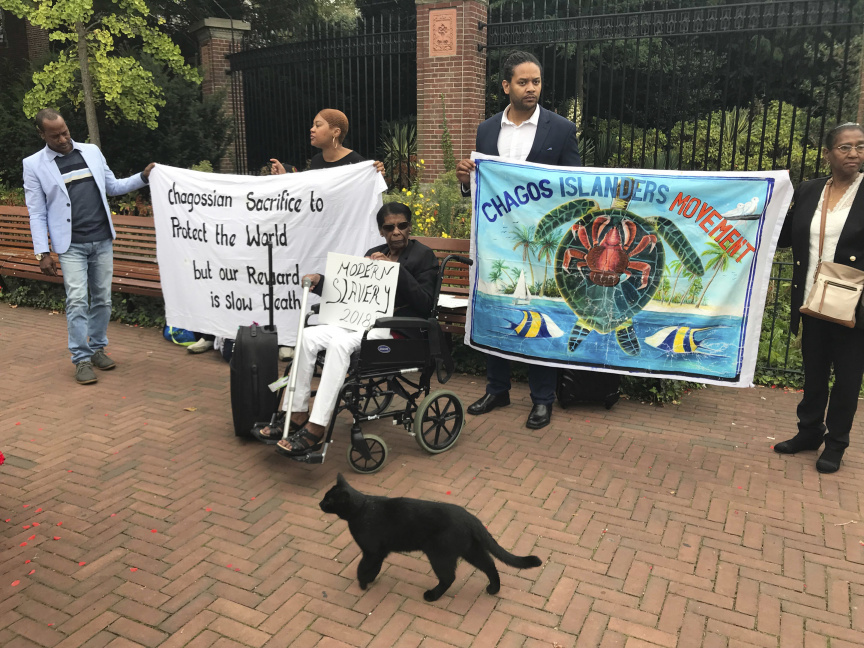 Protesters hold a placard and banners outside the World Court in The Hague, Netherlands, Monday, Sept. 3, 2018. (AP Photo/Mike Corder)

THE HAGUE, Netherlands (AP) — Officials from the Indian Ocean island nation of Mauritius told United Nations judges Monday that former colonial power Britain strong-armed its leaders half a century ago into giving up territory as a condition of independence, a claim that could have an impact on a strategically important U.S. military base.

Judges at the International Court of Justice began hearing arguments for an advisory opinion the U.N. General Assembly requested on the legality of British sovereignty over the Chagos Islands. The largest island, Diego Garcia, has housed the U.S. base since the 1970s.

"The process of decolonization of Mauritius remains incomplete as a result of the unlawful detachment of an integral part of our territory on the eve of our independence," Mauritius Defense Minister Anerood Jugnauth told judges.

Mauritius argues that the Chagos archipelago was part of its territory since at least the 18th century and taken unlawfully by the U.K. in 1965, three years before the island gained independence. Britain insists it has sovereignty over the archipelago, which it calls the British Indian Ocean Territory.

Jugnauth testified that during independence negotiations, then-British Prime Minister Harold Wilson told Mauritius' leader at the time, Seewoosagur Ramgoolam, that "he and his colleagues could return to Mauritius either with independence or without it and that the best solution for all might be independence and detachment (of the Chagos Islands) by agreement."

Ramgoolam understood Wilson's words "to be in the nature of a threat," Jugnauth said.

British Solicitor General Robert Buckland described the case as essentially a bilateral dispute about sovereignty and urged the court not to issue an advisory opinion.

Buckland also disputed Mauritius' claim about coercion, citing Ramgoolam as saying after the deal that the detachment of the Chagos islands was a "matter that was negotiated."

The U.K. sealed a deal with the U.S. in 1966 to use the territory for defense purposes. The United States maintains a base there for aircraft and ships and has backed Britain in the legal dispute with Mauritius.

However, Jugnauth said the base shouldn't be affected by his country's claim against Britain.

"Mauritius has been clear that a request for an advisory opinion is not intended to bring into question the presence of the base on Diego Garcia," he told the U.N. judges. "Mauritius recognizes its existence and has repeatedly made it clear to the United States and the administering power that it accepts the future of the base."

Representatives from about 20 nations, including the U.S., and from the African Union are due to speak in the case this week.

Judges are expected to take months to issue their advisory opinions on two questions: Was the process of decolonization of Mauritius lawfully completed in 1968 and what are the consequences under international law of the U.K.'s continued administration, including with respect to the inability to resettle Chagos residents on the islands?

Britain evicted about 2,000 people from the Chagos archipelago in the 1960s and 1970s so the U.S. military could build an air base on Diego Garcia. The islanders were sent to the Seychelles and Mauritius, and many eventually resettled in the U.K.

The Chagossians have fought in British courts for years to return to the islands. A small group of Chagossians protested outside the court Monday holding banners including one that read: "Chagossian sacrifice to protect the world but our reward is slow death."

Another Chagossian, Marie Liseby Elyse, recorded a video that was shown to judges. In it, she recalled being taken by boat from her home island.

"We were like animals and slaves in that ship," she said. "People were dying of sadness."

Buckland expressed Britain's deep regret at the way the Chagossians were removed.

Britain, "fully accepts the manner in which the Chagossians were removed from the Chagos Archipelago and the way they were treated thereafter was shameful and more," he said.