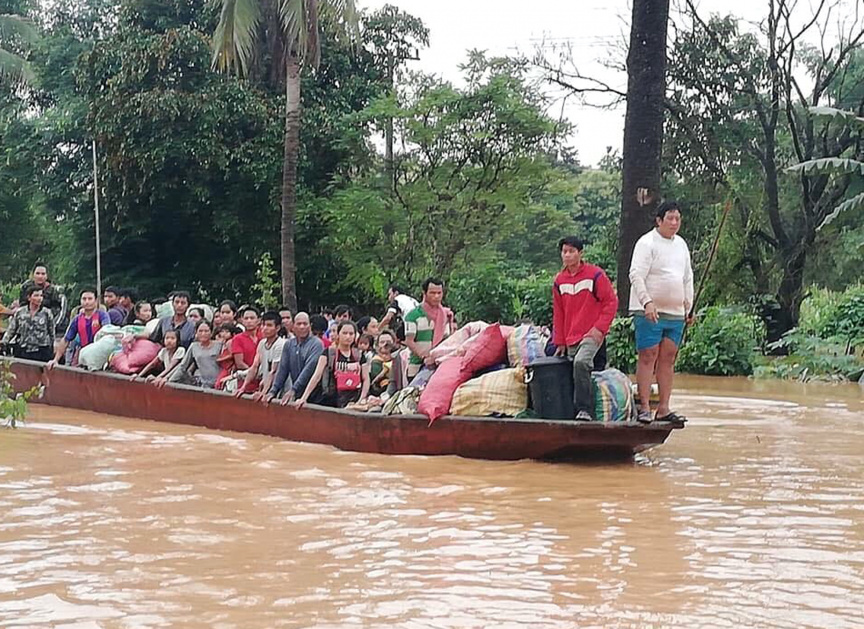 BANGKOK (AP) — Rescuers were searching Wednesday for hundreds missing in villages flooded when part of a newly built hydroelectric dam was breached in southeastern Laos.

SK Engineering & Construction, one of two South Korean partners in the project, said in a statement late Tuesday that the top of one of five auxiliary earth-fill dams at the project "got swept away" on Sunday night after heavy rains.

Repair work for the earth-fill dam was hampered by heavy rain, and damage worsened on Monday, causing water to overflow and flood seven out of 12 villages in the area, the company said. It was helping with rescue efforts and trying to contain further damage.

The website of the state-run Vientiane Times newspaper said Wednesday that two people were confirmed dead as of Tuesday afternoon. The government declared the area a disaster zone and top officials were rushing to the site, it said.

Photos and videos posted on social media showed people sitting on rooftops to escape the surging water, while others were carried to safety or rescued by boat. State media said helicopters were also being used to rescue people.

Continued heavy rain and strong winds forecast for the area could hinder rescue efforts, and risks from flooding persisted in the mountainous region.

South Korea's Yonhap News agency reported that SK E&C sent its president to Laos and set up an emergency team in Seoul.

The company did not respond to requests for comment.

The $1.02 billion project encompassing several river basins in a remote corner of southeastern Laos is the first hydroelectric dam to be built by a South Korean company, and it was unclear how severe the damage would be to the overall plan. The dam was due to begin operating in 2019, with 90 percent of the power generated going to Thailand.

Shares of companies affiliated with SK E&C sank on Wednesday on concerns over potential costs for compensation and other financial setbacks from the disaster.

SK Discovery Co., SK E&C's second-largest shareholder with a 28.25 stake in the builder, tumbled more than 10 percent to trade at its lowest level in more than three years. SK Holdings Co., the biggest shareholder in SK E&C with a 44.48 percent stake, fell 3 percent.

Laos has dozens of hydroelectric projects under construction and plans for sales of power to neighboring countries, now accounting for about a third of its exports, to grow substantially.

But dam building along the Mekong River and its tributaries, including those affected by this disaster has raised concerns over environmental impact and other problems.

International Rivers, a non-governmental group generally critical of such projects, said the catastrophe showed the need to improve warning systems.

"With over 70 hydropower projects currently built, under construction and planned across Lao PDR — most of them owned and operated by private companies — authorities must immediately review how dams are being planned, designed and managed," the group said in a statement.