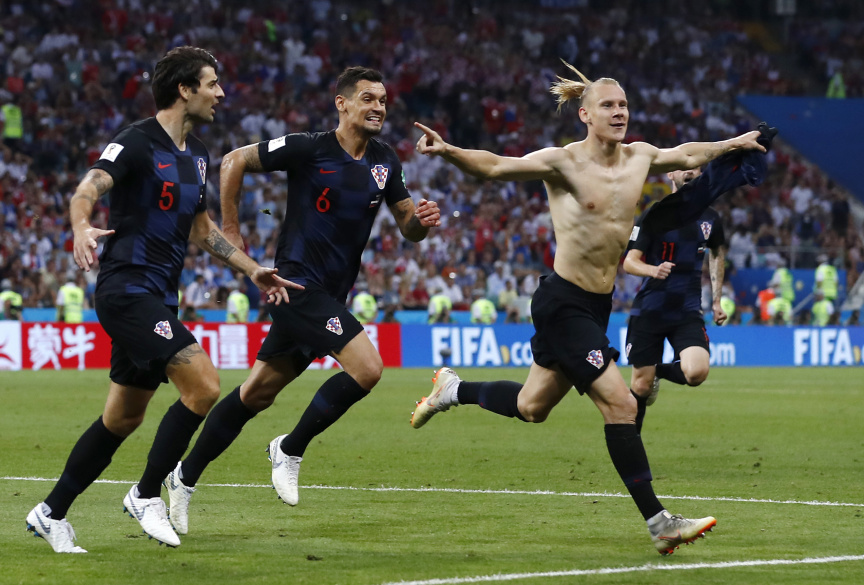 Croatia's Domagoj Vida, right, celebrates with his teammates after scoring his side's second goalduring the quarterfinal match between Russia and Croatia at the 2018 soccer World Cup in the Fisht Stadium, in Sochi, Russia, Saturday, July 7, 2018. (AP Photo/Manu Fernandez)

The Croatian Football Federation and Vida apologized for the video, which was posted after the team beat Russia on penalties in the World Cup quarterfinals on Saturday.

The video shows Vida, who scored against Russia, shouting "glory to Ukraine" before Vukojevic adds "this win is for Dynamo and Ukraine ... go Croatia." Both Vida and Vukojevic previously played for Ukrainian club Dynamo Kiev, and Vukojevic is now a scout there.

The video angered many social media users in Russia, which has tense relations with Ukraine and annexed the Crimean peninsula from the country in 2014. Some Russians said they would cheer against Croatia in its first World Cup semifinal match since 1998.

FIFA rules bar players from making political gestures at the World Cup and the governing body gave Vida a formal warning on Sunday, but did not impose a match sanction.

The Croatian federation said in a statement that Vukojevic, who was also a former player for Spartak Moscow, had been with the team as an observer but his World Cup credentials have now been withdrawn.

"I don't want to be a burden to our team ahead of the extremely important semifinal match of the World Cup, at the moment when the most needed thing for the national team is peace," Vukojevic told Croatian state broadcaster HRT.

Vukojevic said he intended the video as a personal greeting to Ukrainian friends, not as a political statement.

"However, I do understand that my statements can be differently interpreted," he said. "Because of this, I am sorry - and I do apologize to the Russian public, if they perceived my statements like this. I am very proud of Croatia's achievement at the World Cup and I wish the boys all the best luck in the following games."

A team spokesman, speaking about the video, said Vida "regrets" it.

Ukraine's government accuses Russia of arming pro-Russian separatists who control part of the east of the country, and of backing up the separatist groups with military forces.

Vukojevic was appointed last year as a scout for Dynamo after a lengthy playing career, which included being part of the Croatian squad for the 2014 World Cup in Brazil.