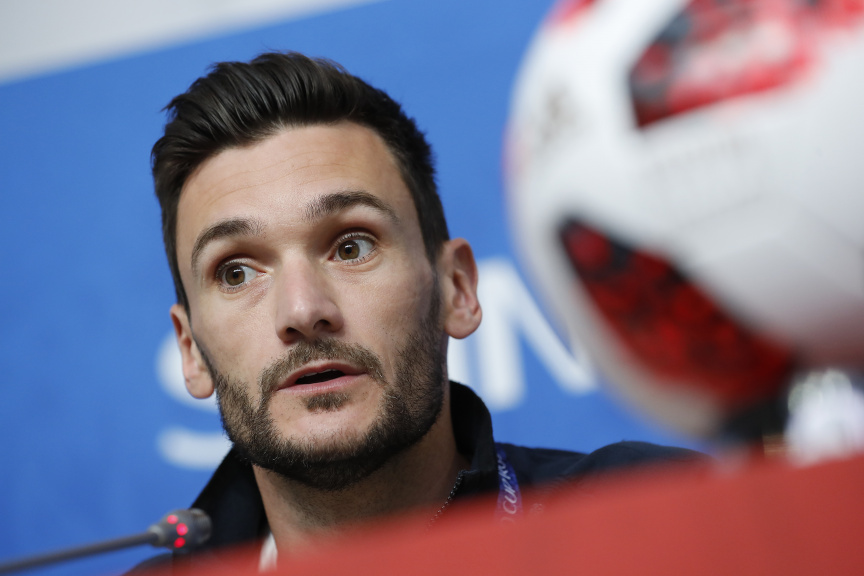 France goalkeeper Hugo Lloris answers to journalists during a press conference at the eve of their semi-final against Belgium at the 2018 soccer World Cup in St. Petersburg, Russia, Monday, July 9, 2018. (AP Photo/David Vincent)

ST. PETERSBURG, Russia (AP) — France goalkeeper Hugo Lloris was back to his best in the World Cup quarterfinals, and he's going to need to be just as good when his team takes on Belgium in the semifinals on Tuesday.

The experienced Lloris, set to make his 103rd international appearance, will be facing a Belgian team that has scored a tournament-leading 14 goals in five matches.

Belgium offers multiple threats, including the speed and trickery of forward Eden Hazard and the strength and finishing of striker Romelu Lukaku, who has scored four goals in Russia. Then there's the heading ability of its defenders Jan Vertonghen and Vincent Kompany, and of midfielder Marouane Fellaini.

Belgium will be coming into the match after rallying from a 2-0 deficit to beat Japan 3-2, followed up by a quality performance in beating Brazil 2-1 in the quarterfinals on Friday.

"They are a great side and have a fantastic generation of players. To beat them, we'll have to play extremely well and need to make our own luck," Lloris said. "We know there will be some tough moments in the game, and we'll have to be ready to suffer. But we will be, because there's a great spirit in this side."

Lloris has faced the vast majority of Belgium's side when playing for English club Tottenham.

"Most of them play in the Premier League, so we know them well. For my part I have three Tottenham teammates," Lloris said. "There will be a lot of great players on the pitch."

Stopping them will be a different matter.

"They beat Japan in a somewhat crazy ending, and beat probably the tournament favorite in Brazil," Lloris added. "I think the Belgians will arrive with a lot of confidence."

France has three shutouts in five games, but blanking Belgium's talented attack will be tough.

"We're going to face one of the best attacking teams," Lloris said. "We will have to play in a very structured way, give them as little space as possible."

In the European Championship final two years ago, France lost to Portugal 1-0. The back line then was missing injured central defender Raphael Varane. The 25-year-old Varane has been does well in Russia, scoring the first goal against Uruguay with a header.

"Varane's very confident after the season he had with Real Madrid, winning the Champions League again," Lloris said. "He's imposing himself more and more. I think he's the leader at the back. He's becoming more and more aggressive in his tackling, and it's great to count on him."

With the second-youngest roster at the World Cup, France has excelled and advanced to the World Cup semifinals for the first time since 2006. The team is supplemented by 19-year-old forward Kylian Mbappe and a pair of inexperienced attacking fullbacks in Benjamin Pavard and Lucas Hernandez.

None played in the Euro 2016 final, but several others did — including Lloris, midfielder Paul Pogba, forward Antoine Griezmann and striker Olivier Giroud.

"It still hurts because we missed out on something exceptional in becoming European champions. You might get that chance again, but it's better to seize it when you get it," France coach Didier Deschamps said. "Now we have the chance to play in the World Cup final. We have to do everything we can to take it."

Deschamps is counting on defensive midfielder N'Golo Kante to help by breaking up Belgium's rapid attacks.

"N'Golo is an essential player. It's not just his work rate, not just his tackling. He also cuts out a lot of passes," Deschamps said. "He had a very specific role against (Argentina forward) Lionel Messi, which he did very well. That's why we hardly saw Messi."