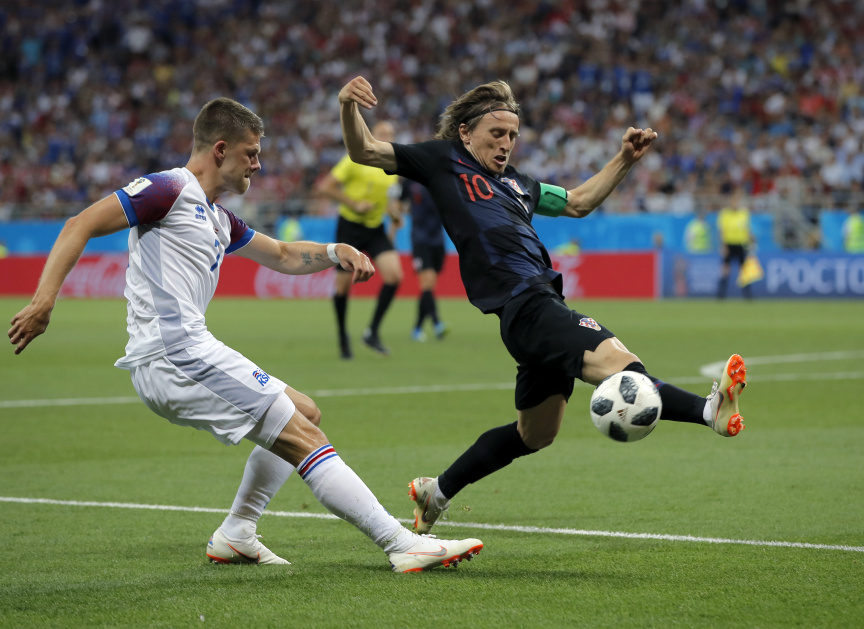 Croatia's Luka Modric, right, duels for the ball with Iceland's Johann Gudmundsson during the group D match between Iceland and Croatia, at the 2018 soccer World Cup in the Rostov Arena in Rostov-on-Don, Russia, Tuesday, June 26, 2018. (AP Photo/Vadim Ghirda)

ROSTOV-ON-DON, Russia (AP) — Croatia ended Iceland's chances at the World Cup and helped out Argentina at the same time.

Ivan Perisic capitalized on a defensive error to score a 90th-minute winner Tuesday, giving Croatia a 2-1 win over Iceland and first place in Group D on Tuesday.

Iceland could have finished second in the group with a victory because Argentina beat Nigeria 2-1 at the same time. Instead, the Croats will face Denmark on Sunday in Nizhny Novgorod and Argentina will take on France on Saturday in Kazan.

Fielding a side filled with reserves after already being assured of a spot in the round of 16, Croatia started to take control of the match in the second half.

Milan Badelj, moments after hitting the bar, scored the opening goal in the 53rd minute. He sprinted into the area and sent a bouncing shot past goalkeeper Hannes Halldorsson.

"The fact that we've brought on nine new players and won is another sign of our strength and depth, and we have to be proud of that," said Badelj, who was man of the match.

Iceland equalized in the 76th when Gylfi Sigurdsson scored from the penalty spot after substitute Dejan Lovren handled the ball.

Defender Sverrir Ingason twice threatened for Iceland, hitting the crossbar with a header in the second half.

"There is too much quality in Croatia," Iceland coach Heimir Hallgrimsson said. "I am disappointed but I am really proud of the character and the performance of the boys.

"It was a bit of a shock to concede one, but we did not give up," he said. "The players should have a lot of credit for this game. I couldn't have been more proud."

Luka Modric led the Croats for 65 minutes before being substituted. The team, which had already advanced going into the match, played with little verve for much of the match as they contained their opponents. Iceland needed a win to have a shot at a place in the elimination round.

Croatia coach Zlatko Dalic said he was pleased to show how deep the quality extended in his side, but also paid tribute to his opponents' "character and discipline."

"I'm upset with the conceded goal, but ... we won nine points, the goal difference is 7-1, and we have top spot in the group. That is fantastic."

Iceland's World Cup dream is over after qualifying for its first-ever World Cup. The nation is the smallest by population, with 350,000 residents, ever to qualify for the tournament. Croatia, which had already qualified for the next round before Tuesday's match, took the full nine points in the group stage. The Croats now go on to face Denmark.

"They are deservedly there in the round of 16," Badelj said of the team's next opponents. "They played a tough game against France, who are strong. But I believe in our strengths and our good form."

The Croatians kept nearly two-thirds of possession and outperformed the Icelanders in passing accuracy.

The game was physical and ended with five yellow cards.

Iceland midfielder Birkir Bjarnason walked off the pitch early in the first half with a bloody nose after being elbowed in the face by Marko Pjaca, and he struggled with the rest of the match.

Iceland's prime minister, Katrín Jakobsdottir, said in a post in English on Twitter: "It's been extremely inspiring for all of us in Iceland to see how your belief in the team and its possible success despite the odds, has carried you this far. Congratulations dear boys!"

As bats fluttered overhead, Iceland fans stood and clapped and were greeted by both teams.

Maradona 'fine' after being treated by doctor at WC