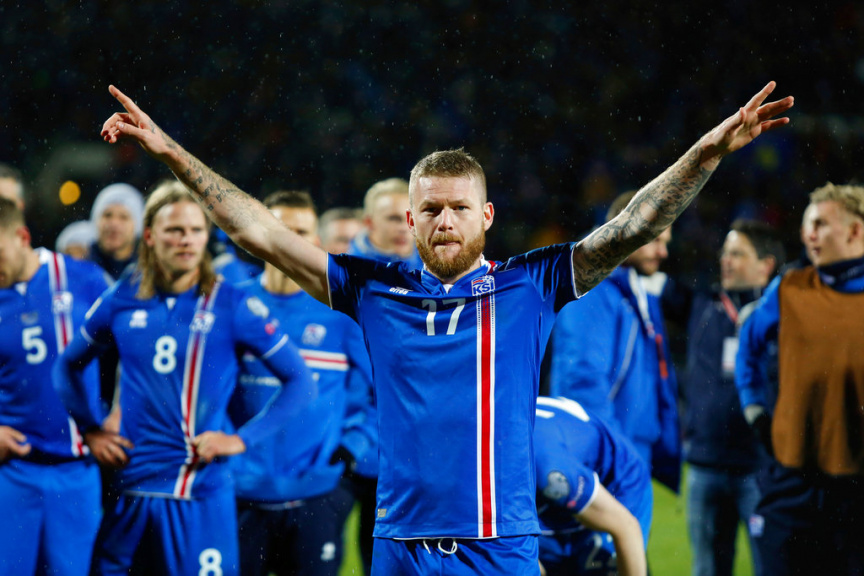 FILE - In this Monday Oct. 9, 2017 filer, Iceland's captain Aron Gunnarsson celebrates at the end of the World Cup Group I qualifying soccer match between Iceland and Kosovo in Reykjavik, Iceland. Icelandic footballers are the tallest at the World Cup in Russia, with an average height of 1.85 meters (just over 6 feet), making them especially strong in aerial duels in defense and attack. (AP Photo/Brynjar Gunnarsson, File )

MOSCOW (AP) — The smallest nation ever to play at a World Cup has a big start against Lionel Messi in Moscow on Saturday.

Just don't expect Iceland to be at all intimidated by Argentina and its superstar forward, going by its European Championship debut two years ago.

Then, the world's other best player, Cristiano Ronaldo, reacted badly to Iceland's come-from-behind 1-1 draw with Portugal.

Frustrated by an organized and disciplined opponent, Ronaldo sneered at Iceland's post-game celebrating by a team "not going to do anything in the competition."

Iceland, of course, advanced to the quarterfinals and went global as a feel-good story in France. Now it can no longer surprise, and has embraced its first challenge.

"You can't have a better welcome," coach Heimar Hallgrimsson said in Moscow last December. "There are a lot of romantic things in our heads now we start to play Argentina."

There has been too little love between Messi and the World Cup in his three previous tournaments. They ended with losses in two quarterfinals and the 2014 final, all against Germany.

"I say that we have to reach the last four at the World Cup," Argentina's team general manager, Jorge Burruchaga, told FIFA's website. "The game on Saturday — the first one — is always the most important. Getting the win gives you confidence, assurance and a boost to your self-esteem."

Four years ago in Brazil, Argentina held off another World Cup newcomer from Europe, Bosnia and Herzegovina, with Messi's second-half goal decisive in a 2-1 win.

Iceland is a similarly robust obstacle, with height and power in aerial challenges. Argentina has the English Premier League experience of central defenders Nicolas Otamendi and Marcos Rojo to help cope.

Turning 31 during the group stage, Messi likely has his last good chance to win a World Cup.

A major international tournament is about all there is left to win for the five-time world player of the year. The 2014 World Cup started a run of losing finals in three straight years, followed by the Copa America twice.

Also joining Messi at a fourth World Cup is teammate Javier Mascherano, who had his 34th birthday last week.

Knee injuries have bothered both teams' preparation. Argentina lost midfielder Manuel Lanzini from its likely starting lineup with a long-term ligament injury at a warmup camp in Spain.

Whatever the result, Iceland will leave some of its best performance for the end, led by captain Aron Gunnarsson.

Gunnarsson, whose usual long red beard lends him a Viking warrior look, begins the post-game, slow-building clapping exchange between teams and fans that is now their trademark.

Expect a significant percentage of Iceland's 330,000 population to join in during the Group D match at the Spartak Stadium in Moscow.

Argentina has support from fans whose singing has helped create a noisy atmosphere in packed late-night streets off Red Square this week.

Putin and Russia get their 1st win at the World Cup