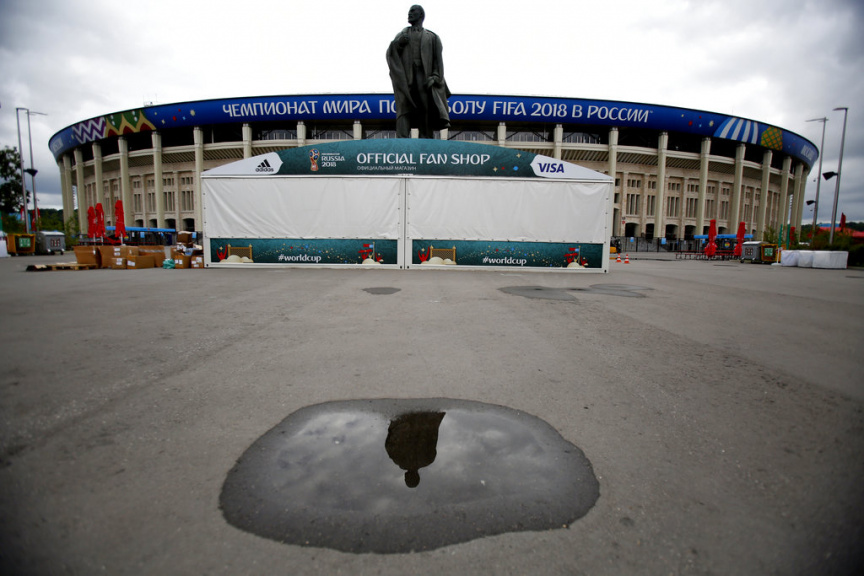 A statue of Lenin is reflected in a puddle outside Luzhniki Stadium on the eve of the semifinal match between Croatia and England at the 2018 soccer World Cup in Moscow, Russia, Tuesday, July 10, 2018. (AP Photo/Rebecca Blackwell)

MOSCOW (AP) — The Latest on Wednesday at the World Cup (all times local):

The subject arose Wednesday in a review of FIFA's anti-discrimination program in Russia. Monitors identified sexist incidents including fans harassing female broadcasters as having been a bigger problem so far than acts of racism.

Addiechi says FIFA's stance is "a normal evolution," and broadcasts in Russia have already improved from the 2014 World Cup in Brazil.

He says FIFA has already intervened with broadcasters "on a case-by-case basis when some cases arose and they were pretty evident."

French President Emmanuel Macron will meet with Russia's Vladimir Putin with France having made it to the World Cup final in Moscow — and on the eve of Putin's high-stakes meeting with U.S. President Donald Trump.

Macron's office said Wednesday that he and Putin spoke by phone after France won its semifinal late Tuesday to advance to Sunday's final. Macron was at the semifinal in St. Petersburg and will travel back to Russia for the decisive closing match.

Macron's office said he will take advantage of his trip for a meeting with Putin but did not elaborate on what the two presidents will discuss.

Macron has sought to raise France's profile by engaging with other world leaders even when they take controversial actions. Macron met Wednesday with Trump at a NATO summit in Brussels where the U.S. president has criticized European allies.

Anti-discrimination experts say with some surprise that sexism has been a bigger problem than racism at the World Cup.

The director of a group called the Fare network that helps FIFA tackle discrimination says 30 cases of "sexism on the streets" by male fans were reported. Fare director Piara Powar says about half of those involved female broadcasters being "accosted while on air."

He estimates "there's many, many more unreported" cases where Russian women were targeted.

Racism had been predicted as a likely problem because of longstanding issues in Russian soccer and among some other European fan bases. FIFA imposed fines during the tournament on soccer federations including Serbia, Russia and Poland for racist, nationalist and offensive banners spotted at games.

Powar says the World Cup's international audience is "very different to the fans that come to domestic football." He suggests "if you come to this tournament with prejudices, and don't like people from a different nationality, then generally you're in the wrong place."

The chairman of Russia's World Cup organizing committee has lamented an apparent lack of fans for the semifinals and final.

There were hundreds of empty seats for France's 1-0 semifinal win over Belgium on Tuesday in St. Petersburg, and the four European countries in the semifinals haven't brought the huge traveling fan groups which South American countries had.

Travel agents have reported a late surge of interest from fans in Britain and Croatia, although getting match tickets and visas could be tricky.

Arkady Dvorkovich says "The teams that had most fans in Russia left early. Latin American teams, Germany, some other teams left, and we're left in the semifinals with the teams that have the least number of supporters, so it's not really good for the economics of football during this last week."

England plays Croatia in the second semifinal Wednesday for a spot in Sunday's final against France.

The World Cup has butted in at the NATO summit in Brussels.

British Prime Minister Theresa May and her Belgian counterpart exchanged national team jerseys at the European Union summit two weeks before their countries met at the World Cup. And May already has a Croatia shirt ahead of Wednesday's semifinal.

May and Croatian Prime Minister Andrej Plenkovic have met on the sidelines of the NATO summit for the friendly exchange. May remains convinced England will advance to its first final since 1966.

May says England coach "Gareth Southgate and the boys have done a fantastic job and I'm sure that they're going to go on and do well. I just wish them all the very best of luck."

The last exchange didn't prove lucky for May, with Belgium beating England in group play. But Belgium was eliminated by France in the first of the World Cup semifinals, a pathway through the knockout stage that England avoided.

The leaders are meeting in Brussels for the annual summit of the 29 NATO allies.

FIFA is letting a top Croatian soccer official watch the team's World Cup semifinal against England from a VIP section on Wednesday despite him being convicted last month in a corruption case linked to the transfer of Luka Modric.

When Croatia beat Russia in the quarterfinals on Saturday, the soccer federation's CEO-like director general sat in the same row of seats as state President Kolinda Grabar-Kitarovic and Russian Prime Minister Dmitry Medvedev.

Damir Vrbanovic has retained his position since being sentenced by a court in Croatia in June to a three-year jail term — though Article 68 of FIFA's disciplinary code bars officials "convicted of a criminal offense in the past five years."

However, FIFA has decided that the sentence is not final because the former Dinamo Zagreb director general is appealing to a higher court