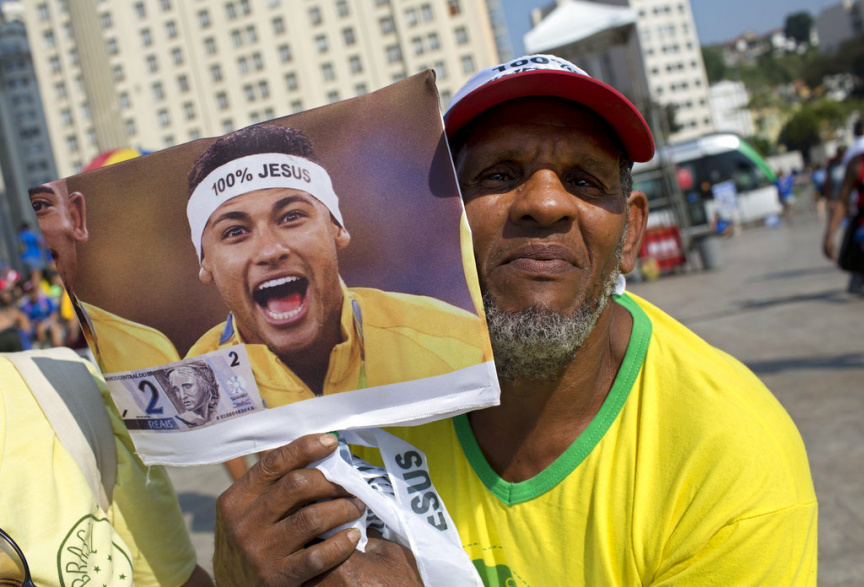 MOSCOW (AP) — The Latest on Friday at the World Cup (all times local):

Brazil coach Tite has made two changes from the team that beat Mexico for the World Cup quarterfinal match against Belgium at Kazan Arena.

Marcelo has recovered from a back injury to take his place at left back in favor of Filipe Luis and Casemiro's absence through suspension has given given Manchester City midfielder Fernandinho a start.

Belgium coach Roberto Martinez has brought Marouane Fellaini and Nacer Chadli into the starting lineup in place of Yannick Carrasco and Dries Mertens.

The two players played big roles in Belgium's comeback win over Japan in the round of 16, both scoring in the team's 3-2 victory. Chadli scored the winner in the final seconds of the match following a thrilling counterattack.

The changes suggest that Belgium is likely to play a more direct approach as it tries to make the semifinals of the World Cup for the first time since 1986. The winner in Kazan will meet France in the semifinals.

For some reason, Croatia can't seem to avoid drawing the host country at the World Cup.

Croatia has only qualified for the World Cup five times, the first coming in 1998. And for the third time in those trips, the Croatians are matched up with the home team. This time it's in the quarterfinals against Russia.

Clearly, Croatia is ready for a different result. A win would put the Croatians in the semis for the second time.

Coach Zlatko Dalic says "We cannot choose our opponents, be it hosts or somebody else. We are facing a huge game, quarterfinals, it doesn't matter who is the opponent. Maybe the only thing is the vociferous support by the fans."

Dalic says is players regularly play way games at packed stadiums "fans howling" for their clubs and "this shouldn't be a problem for us."

"And ultimately we should not be asking or looking for any excuses. We have to play our own game, irrespective of who is in the stands."

England coach Gareth Southgate says there is a generation of young players finally starting to challenge the duopoly of Lionel Messi and Cristiano Ronaldo in world soccer.

Much to his delight, one of them is in his team.

Southgate says Harry Kane has reached "another level" by scoring six goals to top the scoring charts at the World Cup and that the striker is one of the "exciting young players from right across the world announcing themselves" in Russia.

Kane, though, says Messi and Ronaldo are still the benchmark for emerging players and that "you can never write them off."

While Messi's Argentina and Ronaldo's Portugal are already out of the World Cup, Kane can lead England to the semifinals for the first time since 1990 if his team beats Sweden in Samara on Saturday.

Jamie Vardy is still a doubtful starter for England's World Cup quarterfinal match against Sweden because of a groin injury.

Coach Gareth Southgate says the Leicester City striker did what he needed to do in training before the squad left for Samara for the match, but he still worked out "slightly separate" from the team.

Southgate says, "In terms of fitness we just need to check with Vardy in the morning."

Vardy was hurt after going on as a substitute in the 88th minute of England's penalty shootout victory over Colombia in the round of 16.

He has been in the starting lineup only once in Russia, against Belgium, when Southgate made sweeping changes.

France is into the World Cup semifinals for the first time in 12 years after beating Uruguay 2-0. Raphael Varane opened the scoring with a header in the 40th minute and Uruguay goalkeeper Fernando Muslera's error contributed to Antoine Griezmann's clincher in the 61st.

France went on to reach the World Cup final the last two times it advanced this far. It won its only World Cup in 1998 on home soil, and in 2006 lost the final to Italy on penalties.

Varane raced across the area to meet a free kick and struck a glancing header that went into the far corner behind keeper Fernando Muslera.

Muslera was then to blame for Griezmann's second-half goal when he tried to parry his shot away and instead saw it deflect off both hands into the goal.

These were only the second and third goals conceded by Uruguay in five World Cup matches. Uruguay played without striker Edinson Cavani who sat on the bench with an injured left calf picked up victory over Portugal in a round-of 16 match. Substitute Cristhian Stuani filled in for Cavani, teamming up front with Luis Suarez.

France faces either Brazil or Belgium in the semifinals.

France forward Kylian Mbappe and Uruguay midfielder Cristian Rodriguez have picked up yellow cards after a testy exchange in the World Cup quarterfinal at Nizhny Novgorod.

With France leading 2-0 in the second half, Rodriguez appeared to stick his arm back as Mbappe jogged behind him. Mbappe dived to the ground as if injured, immediately angering Uruguay's players.

The game stopped for several minutes as players from both squads pushed and shoved while Mbappe lay on the pitch simulating an injury.

France leads Uruguay 2-0 and appears to be on course for a World Cup semifinal spot, helped by a blunder from Uruguayan goalkeeper Fernando Muslera.

Antoine Griezmann extended France's lead in their quarterfinal in Nizhny Novgorod in the 61st minute with a long-range shot that Muslera got both hands to but deflected into his own net.

Griezmann's shot was straight at Muslera, but the keeper couldn't hold it and it looped into the net.

France took the lead five minutes before halftime with a header from defender Raphael Varane. Griezmann was also involved in the openiner, providing the free kick from the right for Varane to head home.

Uruguay started without key striker Edinson Cavani, who hasn't recovered sufficiently from a left calf muscle injury. He sat on the bench during and looked unlikely to play any role in the game.

France leads Uruguay 1-0 at halftime of their World Cup quarterfinal after a header five minutes before the break from Raphael Varane.

The French defender made an angled run and met a free kick from the right side from Antoine Griezmann to put his team ahead in the 40th minute in Nizhny Novgorod. He glanced his header into the top left corner of the goal.

Uruguay nearly replied immediately, also from a set-piece, when Martin Caceres' header was saved low to his right by France goalkeeper Hugo Lloris.

France had the better of the first half but had to work to break down Uruguay's stubborn defense. Varane's header was only the second goal Uruguay has conceded at the tournament.

Uruguay started the game without key striker Edinson Cavani, who hasn't recovered sufficiently from a left calf muscle injury. He sat on the bench during the first half, with Cristhian Stuani taking his place in the lineup and playing up front with Luis Suarez.

The winner in Nizhny Novgorod plays Brazil or Belgium in the semis.

France forward Antoine Griezmann has arrived for the World Cup match against Uruguay sipping from a mate (MAH'-tay) gourd — perhaps as a silent retort to Luis Suarez.

The Uruguay striker took a verbal shot at Griezmann earlier this week ahead of Friday's quarterfinal, accusing him of trying to be Uruguayan. Griezmann plays at Atletico Madrid alongside Uruguayan defenders Diego Godin and Jose Maria Gimenez. Godin is godfather to Griezmann's daughter, and Griezmann has a fondness for the tea popularly sipped from a gourd in Uruguay and Argentina.

Suarez stepped off the Uruguayan team bus at Nizhny Novgorod Stadium sipping from a mate gourd. Moments later, Griezmann did likewise as the French team arrived.

FIFA says the Sweden team defied requests "to cease the activity that led to the sanction."

The case relates to some players wearing branded socks that supplement the official team uniform.

FIFA says its marketing and equipment rules were broken again when Sweden beat Switzerland 1-0 in a round of 16 game.

Sweden plays England on Saturday in the quarterfinals.

Edinson Cavani is not in Uruguay's starting lineup for the World Cup quarterfinal against France in Nizhny Novgorod.

The striker, who scored two goals and then injured his left calf in the round of 16 win over Portugal last Saturday, hasn't fully recovered and is replaced by Cristhian Stuani.

That's the only change made by Uruguay coach Oscar Tabarez from the 2-1 victory over Portugal.

France coach Didier Deschamps also made just one forced change: suspended midfielder Blaise Matuidi has been replaced by Corentin Tolisso. Matuidi picked up a second yellow card when France beat Argentina 4-3 in the round of 16.

Uruguay is seeking a place in the semifinals for the second time in the last three World Cups. France is aiming to go past the quarters for the first time since it lost the final to Italy in 2006.

Cherchesov says "the support of the head of state is important for us and the players know about it and it's extra motivation."

While Putin has watched only Russia's opening 5-0 win over Saudi Arabia, Cherchesov says "he has called me several times, and both before and after the game against Spain."

Russia beat Spain on Sunday in a penalty shootout in the last 16.

Russia plays Croatia in Sochi on Saturday, for a potential semifinal against England or Sweden. The Kremlin has said Putin doesn't plan to attend the quarterfinal.

Russian President Vladimir Putin says the World Cup has helped combat negative stereotypes about Russia and showed the country to be a welcoming place.

Putin made the comments on Friday when he was hosting FIFA President Gianni Infantino and some soccer greats at the Kremlin.

Putin said, "People have seen that Russia is a hospitable country that is welcoming to those who come here."

He added that many negative preconceived notions about Russia "simply collapsed" during the tournament.

Among the players at the Kremlin were Marco van Basten of the Netherlands, Lothar Matthaeus of Germany, and Diego Forlan of Urugway.

Sweden captain Andreas Granqvist has become a father again, one day before leading his team against England in a World Cup quarterfinal.

Granqvist's wife, Sofie, announced on her Instagram account their daughter's birth at 00:36 a.m. on Friday in Sweden.

She wrote: "And she arrived and made our life complete, baby Mika #babymika #finally."

Granqvist has his wife's blessing to stay in Russia until the end of Sweden's surprise deep run in the tournament.

Their baby was originally due in June, then was expected on Tuesday when Sweden beat Switzerland 1-0 in the round of 16.

Sweden plays England in Samara on Saturday for a place in the semifinals.

Jamie Vardy has missed most of England's training and appears unlikely to be fit for the World Cup quarterfinal against Sweden on Saturday.

Vardy injured his groin on Tuesday after going on as a substitute in the 88th minute of England's penalty shootout victory over Colombia in the round of 16.

He only warmed up with the squad on Friday at its base outside St. Petersburg and didn't take part in the rest of the session.

Vardy has started only one match in Russia, against Belgium, when coach Gareth Southgate made sweeping changes to his lineup including resting captain and World Cup leading scorer Harry Kane.

Cristiano Ronaldo's agent has told Portuguese newspaper Record the player would be "eternally grateful" to Real Madrid if he ends up leaving the European champion.

Jorge Mendes quoted by Record saying that if Ronaldo moves to Juventus, "it will be just a new phase and a new challenge in his brilliant career."

Local media in Spain and Italy claim Ronaldo has already reached a deal to sign with the Serie A champion, although neither club has officially confirmed the negotiations.