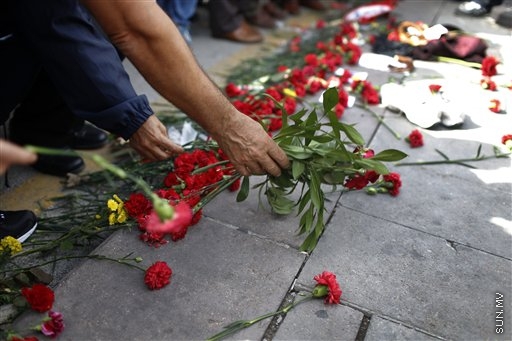 Ambassadors from European Union countries paid their respects to the 97 victims of the twin blasts at a peace rally in Ankara.

The ambassadors on Monday laid flowers outside Ankara's main train station — the site of the Turkey's deadliest terror attack in years.

They arrived in a convoy of cars bearing their countries flags.

Hundreds of people have marched in the Turkish capital of Ankara to condemn the suicide bombings that killed 97 people and wounded hundreds at a peace rally.

The march Monday turned into an anti-government protest, with demonstrators accusing the government of not taking measures to protect the rally — or even being behind the deadly attack. Demonstrators chanted: "The killer state will be held to account!"

A similar protest was held at a university campus in the capital.

The Turkish government raised the death toll in Saturday's attack to 97, including one Palestinian. A pro-Kurdish party has said up to 128 people died.

Switzerland's Foreign Ministry is warning its citizens traveling to Turkey to be "alert and careful" in the wake of the weekend's bombing attacks in Istanbul.

The ministry said in an updated travel advisory Monday that "Turkish authorities are warning of the risk of terrorist attacks" across the country despite heightened security measures.

The ministry added that tourists should "avoid large gatherings and demonstrations of any kind."

At least 97 people were killed in two bombings in Turkey's capital, Ankara, on Saturday that targeted a peace rally.

The German government says Chancellor Angela Merkel will travel to Turkey on Sunday for talks with the country's leaders on terrorism, Syria and the migrant crisis.

Seibert said the visit will focus on the countries' "common fight against terrorism," the situation in Syria and dealing with migrant crisis.

Germany and other European Union countries hope for help from Turkey to stem the influx of refugees and other migrants into EU member Greece.

Turkey's prime minister says authorities are close to identifying one of the suicide bombers who carried out the blasts in Ankara that killed 97 people.

Ahmet Davutoglu said evidence point to "a certain group" which refused to identify in a group interview on Monday. However, he confirmed that the Islamic State group was the "No.1 priority" of the investigation.

Davutoglu said the attacks that targeted activists gathering for a rally to call for peace with the Kurdish rebels were aimed to "cast a shadow" over Turkey's Nov. 1 election and to influence the result. He did not elaborate.

The Turkish leader rejected accusations that Turkey was being drawn into the crisis in Syria saying: "These attacks won't turn Turkey into a Syria."

A newspaper close to the Turkish government says authorities investigating the twin suicide bombings at a rally promoting peace with the Kurdish were focusing on the Islamic State group, comparing DNA samples of suspected bombers with those obtained from families of extremists they suspect could have carried out the attacks.

The newspaper, Yeni Safak, reported Monday that investigators were testing DNA samples obtained from families of some 20 Turks they believe are IS militants and prepared to carry out suicide bombings.

The government, meanwhile, raised the death toll in Turkey's deadliest attack in years to 97 and said the victims included a Palestinian. A pro-Kurdish party has said that up to 128 people died in the attacks Saturday.

Turkey's government has raised the death toll to 97 from the bombing of a weekend peace rally. One Palestinian was reported to be among the dead.

Turkish authorities say police have detained four suspected Islamic State militants in a raid in the southern city of Adana. It was not clear where the arrests, announced Monday, were linked to the suicide bombings at a rally promoting peace with the Kurdish rebels.

No one has claimed responsibility, but the attack bears similarities to a suicide bombing the government blames on the Islamic State group that killed 33 people at a town bordering Syria in July.

The Latest: EU migrant numbers down in September