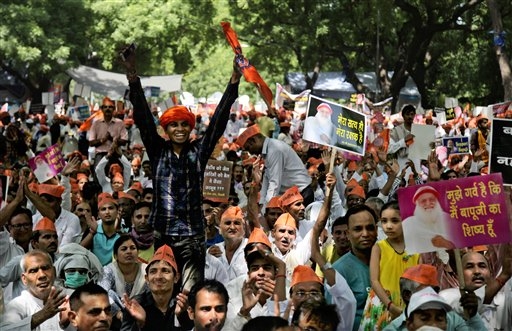 NEW DELHI (AP) — Police in India were investigating complaints from two women that a Saudi Arabian diplomat raped them repeatedly and confined them in his home near New Delhi. He has claimed diplomatic immunity, and the Saudi embassy in a statement Wednesday denied all the allegations.

The women working as maids in the diplomat's house were rescued Monday after a non-governmental organization tipped off police.

Police have registered a case of rape and illegal confinement against the official, although he has not been named in the complaint.

Navdeep Virk, a top police official, said that the women told police they were beaten and raped repeatedly during the past few months.

He said police were investigating and would submit a report to India's ministry of external affairs as the case involved a diplomat. India's external affairs ministry said it would take action against the diplomat after it receives the police report.

The women told police that they were lured from their homes in Nepal by recruiting agents who supplied them to the diplomat. When they were hired in April they were promised high wages compared to their earnings in Nepal. However, they had not been paid any money at all since they started work, police said.

The women told police they were not allowed to leave the house and were locked in the apartment when the diplomat's family went out.

Police said the case was registered after a medical examination of the women confirmed the rape and sexual assault.

A new maid who joined the household fled when she saw the plight of the two women. She then complained to the NGO, which went to police.

The diplomat was at the Saudi embassy in New Delhi all day Wednesday.

Deep Upadhyay, Nepal's ambassador to India, said his country would file a complaint with the Saudi government once the investigations ended.

The women were in New Delhi due to the investigations, but have told police they wanted to return home to their families.

Thousands of poor women leave Nepal each year to work as housemaids abroad, especially in Southeast Asia and in the Gulf countries.