US, Iran hopeful on speeding up nuclear talks 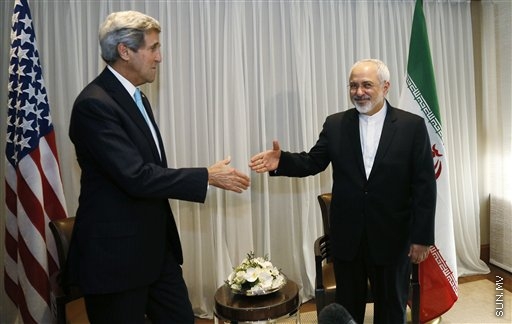 GENEVA (AP) — The United States and Iran are expressing hope that nuclear talks can be accelerated in order to meet a March target for a framework agreement, as the countries' top diplomats met Wednesday ahead of a resumption of full negotiations.

U.S. Secretary of State John Kerry and Iranian Foreign Minister Mohammed Javad Zarif met for six hours Wednesday, a day before negotiators from Iran, the five permanent members of the U.N. Security Council and Germany are to resume talks here.

Kerry postponed his flight from Geneva to meetings in Sofia, Bulgaria, to resume meeting with Zarif late Wednesday.

Ahead of the first session, Zarif said his talks with Kerry would show that both sides understand the importance of picking up the pace.

"I think it's important," he told reporters. "I think it will show the readiness of the two parties to move forward to speed up the process."

Zarif was coy when asked if he thought the deadline could be met and what particular issues were most vexing.

Kerry and Zarif also took a walk together around Geneva. Asked how the talks were going, Kerry said, "We are working hard."

Kerry said earlier this week that he's meeting Zarif to take stock of the negotiations.

"We are at a juncture where most of the issues are now getting fleshed out and understood," he told reporters on Monday in India before he flew to Pakistan and then on to Switzerland. He said he hoped to be able to "accelerate the process to make greater progress."

The U.S. and its partners are hoping to clinch a deal with Iran that would set long-term limits on Iran's enrichment of uranium and other activity that could produce material for use in nuclear weapons. Iran says its program is solely for energy production and medical research purposes. It has agreed to some restrictions in exchange for billions of dollars in relief from U.S. economic sanctions.

The negotiators are trying to turn an interim accord into a permanent deal that would address international concerns about Iran's nuclear program. In November, after failing to meet an earlier deadline, they set March as the target for a framework agreement and the end of June for a final pact.

After meeting with Zarif, Kerry will travel to Sofia, Bulgaria for talks with officials and then to Paris, where he will see French officials, including President Francois Hollande, and pay his respects to the victims of last week's deadly terrorist attacks.

US state carries out its first execution since botched one