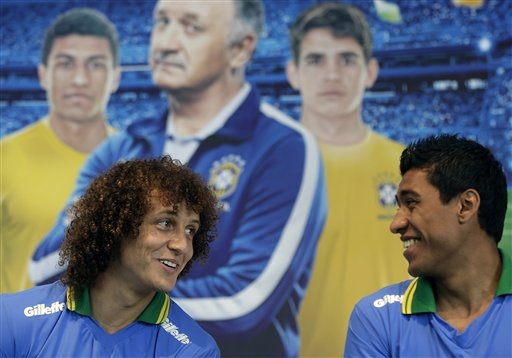 LONDON (AP) — Chelsea has agreed to sell David Luiz to French champion Paris Saint-Germain in a deal that will reportedly make the Brazil international the world's most expensive defender.

Chelsea and PSG both announced the deal in separate statements late Friday, but did not disclose financial details. The move cannot be completed until the start of the transfer window on June 10, but PSG said all sides wanted to reach an agreement "as soon as possible" so that Luiz can "prepare for and play in the World Cup in his home country in the best possible conditions."

Chelsea said the Brazil international has passed a medical examination but still needs to finalize the personal terms of his contract with PSG.

PSG paid a reported 42 million euros in 2012 for Thiago Silva, who could now link up with his Brazil teammate in central defense.

Luiz's arrival will also make up for the departure of Alex, another Brazil defender bought from Chelsea in 2012, who is out of contract.

Luiz has been one of the Premier League's top defenders and free-kick takers over the past few seasons, and can also play as a defensive midfielder.

He is expected to start for Brazil at this summer's World Cup.