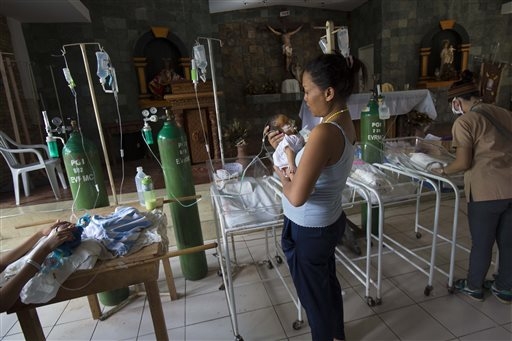 TACLOBAN, Philippines (AP) — Althea Mustacisa was born three days ago in the aftermath of the killer typhoon that razed the eastern Philippines. And for every one of those three days, she has struggled to live.

But she has clung to life because her parents have been pushing oxygen into her tiny body with a hand-held pump non-stop ever since she came into this world.

And "if they stop, the baby will die," said Amie Sia, a nurse at a hospital in typhoon-wracked Tacloban city that is running without electricity and few staff or medical supplies.

More than a week after ferocious Typhoon Haiyan annihilated a vast swath of the Philippines, killing more than 3,600 people, the storm's aftermath is still claiming victims — and doctors here fear Althea may be the next.

When the fierce storm smashed into this tropical country on Nov. 8, it transformed Tacloban into an unrecognizable wasteland of rubble and death.

The bottom floor of the two-story government-run Eastern Visayas Regional Medical Center was flooded, and the intensive care unit for newborns was left a muddy ruin. Life-saving machinery, like the facility's only incubator, was soiled with water and mud.

As the storm hit, doctors and staff took 20 babies who were already in the intensive care unit to a small chapel upstairs for their safety, placing them three or four in one plastic crib cart built for one newborn.

With the chapel converted into an ad-hoc neonatal clinic, all the babies survived initially. But six died later, "because we lack vital medical equipment that was destroyed," said the attending physician, Dr. Leslie Rosario.

Within days, however, 10 more babies born during or in the aftermath of the storm were taken in, including Althea. She was born at the hospital on Nov. 13, weighing 2.65 kilograms (5.84 pounds), suffering from an inability to breathe.

Doctors performed CPR on her and since then they have been giving her oxygen from the hand-held pump connected to a blue rubber bubble that fits into her tiny mouth and draws sustenance from a green tank through a transparent pipe.

Doctors said the storm had not been a factor in the baby's problems, noting that insufficient prenatal care most likely complicated the pregnancy for the 18-year-old mother. The baby was not born premature.

Still, there was a good chance of saving Althea had the hospital been equipped with electricity that would have run a ventilator, incubator and other life-saving equipment.

Until Saturday, the makeshift ward in the chapel had no light except candles. On Saturday, one small fluorescent bulb attached to a diesel generator was hung in the middle of the room where a few packs of diapers sit on the altar below a picture of Jesus.

On the floor are a few more boxes of the only medical supplies left — water for IV fluids, syringes, a handful of antibiotics.

The hospital also lacks manpower. In the neonatal clinic alone, only three out of 16 staff are still working, Rosario said. The rest never reported back after the storm. The Philippines Department of Health sent two nurses from Manila to help.

The hospital chapel's windows are all shattered and missing. It is now filled with 24 babies — five of them in critical condition, the rest with fevers or other ailments. Many were born premature.

Their parents are there too, resting on 28 rows of wooden pews. Three mothers have IV drips in their arms.

Nanette Salutan, 40, is one of them. She said her labor contraction began just as the winds from Haiyan began howling. The contractions continued after the storm eased, and she walked to the hospital with her husband. It was an eight-hour trek through corpse-filled rubble and waist-high water.

"All I could think was, I wanted my baby to live," Salutan said.

But he did not cry, and they knew immediately something was wrong.

The baby was not breathing.

Doctors performed cardiopulmonary resuscitation, and put clear green tubes of oxygen in his nose. He is still so weak that he has to be fed by a syringe that is connected to a tube taped to his mouth.

Rosario said Bernard had a decent chance of survival. But Althea's prognosis is not good.

In a heart-stopping moment, her body turned blue as her breathing became more labored. Doctors rushed in and connected an IV needle into the remnant of her umbilical cord -- the one in her wrist had been there too long to be effective, they said. Slowly life flowed back into her tiny body.

"If we had a ventilator, it's possible she could live," Sia said. "But right now she's very weak, and I don't think she's going to make it."

"They've been traumatized by the typhoon, and now they're traumatized because they're trying to keep their baby alive," Rosario said of Althea's parents. "They're physically and emotionally exhausted."

As she spoke, Althea's mother, Genia Mae Mustacisa, leaned over her baby girl, stroked her forehead and kissed it.

The newborn lay on a wooden table, eyes closed, wrapped in a blue- and white-striped blanket. Her feet poked out, revealing a pair of mismatched socks — one with pink and red hearts, one of the "Peanuts" comic character Snoopy sweeping with a broom.

Methodically, her mother squeezed a green rubber bag attached to the tall tank of oxygen slowly over and over, every few seconds, just as her husband had done for half an hour before.