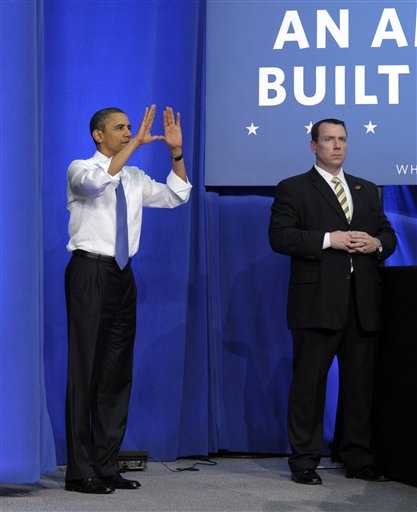 Obama was seeking to rev up his supporters as he hauled in campaign cash Thursday in the important battleground state of Florida, which he may need to capture to hold the White House in November. He accused his Republican presidential rivals of peddling a philosophy that is "wrong about America," casting them as protectors of the wealthy who would leave everyone else to fend for themselves.

Obama assailed Republicans for offering what he described as flawed and dishonest plans to lower gasoline prices. He said dismissively that all the Republicans can talk about is more drilling — "a bumper sticker ... a strategy to get politicians through an election" — when America's energy challenges demand much more. In a speech in Miami, he promoted the expansion of domestic oil and gas exploration but also the development of new forms of energy.

For all the political claims, economists say there's not much a president of either party can do about gasoline prices in the short term. But it's clear that people are concerned — a new Associated Press-GfK poll says seven in 10 find the issue deeply important — so it's sure to be a political issue through the summer.

Obama aides worry that the rise in prices could reverse the country's economic gains and the president's improved political standing. The poll shows that though Obama's approval rating on the economy has climbed, 58 percent disapprove of what he's doing on gas prices.

Obama insisted there are no short-term solutions to high gas prices, and that anyone suggesting otherwise was not being honest. Still, he sought to offer something to anxious voters by saying he had ordered his administration to search for every possible area to help consumers in the coming months.

He sought to take credit for rising oil and natural gas production, a greater mix of energy sources and decreased consumption. He promoted an energy strategy that the administration says will reduce dependence on foreign oil in the long term.

Obama said that despite political criticism of his policies "America is producing more oil today than at any time in the last eight years." He also noted that, for the first time in 30 years, the United States is now exporting more petroleum products than it imports.

Republicans have seized on the issue, citing Obama's decision to reject a permit for a cross-country oil pipeline as evidence of a misguided policy.

At an Arizona event, former Sen. Rick Santorum of Pennsylvania — who has warned of record-high gas prices — asserted that "we have a lot of troubles around the world, as you see the Middle East in flames and what's going on in this country with gas prices and the economy." And former Massachusetts Gov. Mitt Romney suggested that even more troubling than rising gasoline prices was Iranian President Mahmoud "Ahmadinejad with nuclear weapons."

On the Republican campaign trail, Romney tried to upend Santorum's image as a principled defender of conservative ideals Thursday, telling voters that the former senator is just another give-and-take politician.

Romney's team believes Santorum opened himself to the attacks with a somewhat anguished explanation of his reluctant vote for a huge Bush-era school reform program in Wednesday's televised debate. Romney hoped to stop his chief rival's momentum on a day when Santorum was quietly raising money.

A Romney setback in either Arizona's or especially Michigan's primary on Tuesday would be a major setback, especially in his native state of Michigan. Romney had been expected to win there, as he did when he ran in 2008, before Santorum surged by winning three votes on the same day earlier this month. Romney's campaign seemed grateful for Santorum's unsteady showing in what may have been the Republican campaign's last big debate in the state-by-state race to challenge Obama.

Romney pounced on Santorum's explanation for supporting President George W. Bush's "No Child Left Behind" program, now disliked by many conservatives. "It was against the principles I believed in," Santorum said in the debate. "But, you know, when you're part of the team, sometimes you take one for the team."

"I wonder which team he was taking it for," Romney said Thursday in Phoenix, Arizona, before heading to Michigan. "My team is the American people, not the insiders in Washington."

Romney's remarks to a conservative tea party audience in Michigan later were devoted to the economy.

"The highest priority is making sure we get on a track to a balanced budget," he said, adding that he would eliminate some programs and cut others, and make sure his proposed across-the-board tax cut didn't add to the federal deficit.