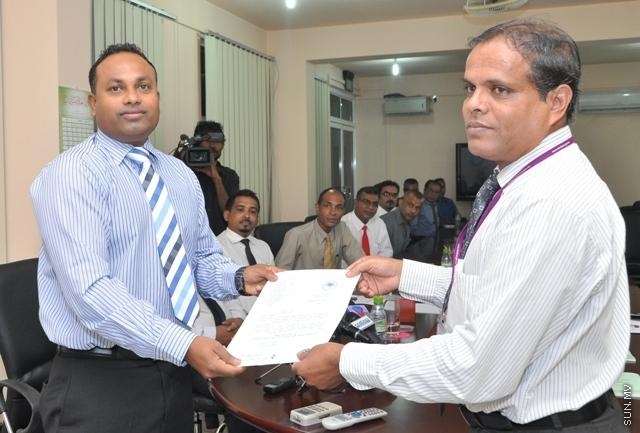 Elections Commission has granted permission to former Deputy Commissioner of Police, Minister of State for Home Affairs Mohamed Fayaz to find the 3,000 people necessary to form a new political party.

NIA would be the 17th political party to be registered in the country.

Speaking at the ceremony, Fayaz said that the party will focus on gaining economic freedom for citizens, and on bringing about a ‘revolution’ to Maldivian businesses and medium-sized companies by obtaining assistance from the government and other sources.

“Regardless of the type of work, be it fishing, farming or running a guest house… if it would result in an economic benefit, our party will work on facilitating investments and job opportunities for Maldivians,” said Fayaz, who has served Maldives Police Service for over 20 years.

He said that the party would work with the government regardless of which party is in power, and that it wants to cooperate with the party that wins the 2013 elections. He said, however, that they do not agree with the ideologies and religious views of some political parties in the country. He also said that the party will be able to meet the requirement of 3,000 members within a month or so.

Speaking at the ceremony, Elections Commissions member Ali Mohamed Manik said that complaints are being received from people who are made to join political parties without their knowledge, and advised parties to refrain from such practices. Out of the 16 registered political parties, only few are active. He however noted the activities of the most recently formed parties, PPM and MDA.