The claim that Maldives has limited sources of revenue is not true: Siyam 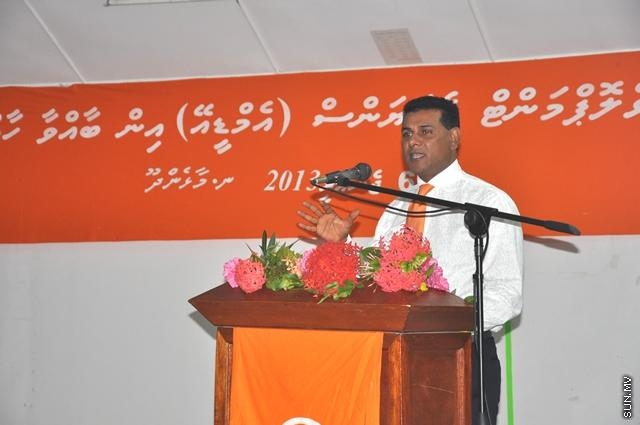 Leader of Maldives Development Alliance (MDA) Ahmed Siyam Mohamed has said that the claim that the Maldives has limited sources of income is baseless and untrue. Siyam made this comment while speaking at a meeting in Noonu Maalhendhoo last night as part of MDA’s current trip to Noonu atoll.

Siyam said that the natural richness of Maldives cannot be compared with that of any other country; however, this richness can only be utilised for the benefit of the nation by being aware and well informed of it.

“The claim by some leaders that the Maldives has limited sources of income is baseless. I have experienced this myself. I can clearly see the natural richness of the Maldives. It is a wealth more valuable than that bestowed on any other people,” he said.

He said that the geographic location of the Maldives is also special, allowing it to enjoy security and safety unlike many other countries of the world.

Siyam further said that drugs became a common problem in the Maldives causing children to end up on the streets because leaders did not put in adequate efforts for the sake of the nation’s children.

He said that presidents and ministers should have equal shares as citizens, and that services should be provided without discrimination as stipulated in the constitution, and that the people should be seen as the country’s shareholders.

Deputy Leader of MDA Ali Mauroof said while speaking at last night’s meeting that the world has experienced the success of multi-party democracy, and that this system needs to be developed in order to truly hear the voice of the people. He said that we should all thus join forces to develop this system because the nation’s interests lie in those efforts. He assured that MDA will pay special attention to the needs of the youth of Maalhendhoo, and requested to establish a youth organisation in the island.

Deputy Leader of MDA and MP Ahmed Amir said while speaking at a meeting in Henbadhoo that it is misleading to say that people will not have their fundamental rights protected unless these rights are provided or made possible by a particular person. He said that these rights are guaranteed in the constitution, and shed light on the articles of the constitution that relate to this. He said that regardless of the leader or the government that is in power, citizens have to be guaranteed their fundamental rights.

Deputy Leader of MDA Aishath Rafiyya said while speaking at the meeting in Maalhendhoo that the democracy in the Maldives is still an infant democracy, and that the direction in which it is headed presently is not the best. She noted that there are several problems associated with the efforts made in the name of democracy in the Maldives, and said that it has led to problems between individuals and divisions within families and societies. She said that the time has come for everyone to work together to correct this system and assured that MDA will show the best conduct to employ in efforts to strengthen democracy. She urged women to be assertive and undertake special projects in this regard.

Council President of Maalhendhoo Abdul Rasheed Hassan, who recently joined MDA, related stories of the hardships of the island people. He said that the people are facing serious problems due to lack of fresh water, and that water from wells has a foul smell despite the fact that every well has more than one oxygen pump attached to it. He said that people are afraid of the health hazards that can be caused by this. He further pointed out that the island’s harbour has been damaged now for several years, and said that Siyam is a leader who knows how to bring about development and that he has proved this to the people. He said that this is evident in Siyam’s businesses, as well as in the constituency he represents at the parliament.

MDA was warmly welcomed by the people of Henbadhoo and Maalhendhoo upon arrival in the two islands. Party Secretary General Mohamed Anees told Sun Online that the total number of people joining MDA from Noonu atoll has increased greatly.