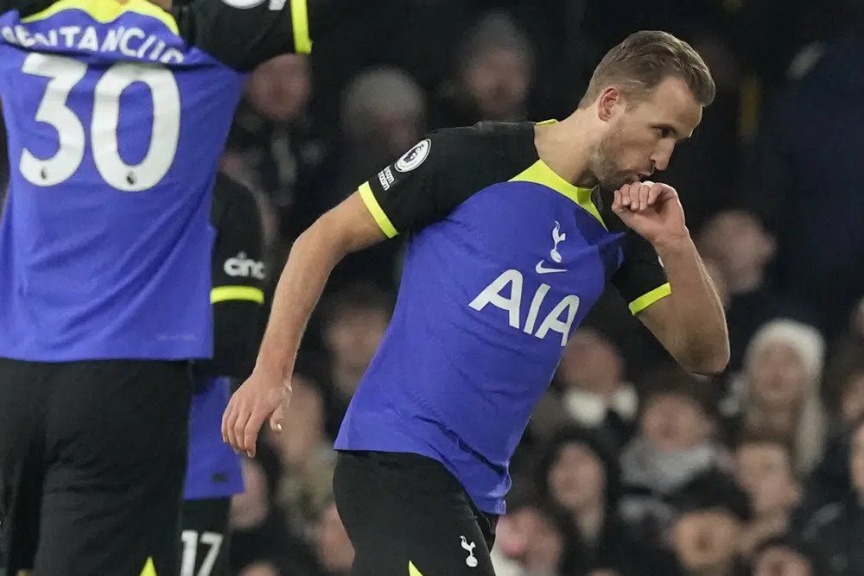 LONDON (AP) — Harry Kane became Tottenham’s joint-leading scorer of all time by netting in a 1-0 win over Fulham that moved his team three points off the Premier League’s top four on Monday.

Kane received a pass with his back to goal at the edge of the area, swiveled and curled a shot into the bottom corner for his 266th goal for Tottenham, putting him level with the late Jimmy Greaves.

The finish was classic Kane as he moved to 15 league goals for the season, and 199 in his career. It is shaping up to be his most prolific season yet even if his scoring exploits have been overshadowed by those of Manchester City’s Erling Haaland, who already has 25 league goals to his name in his first year in English soccer.

The goal in first-half stoppage time settled a scrappy game that kicked off about 20 minutes late because of traffic problems in southwest London.

Tottenham stayed fifth but narrowed the gap to fourth-place Manchester United in the race for Champions League qualification.

“We just wanted to get back to basics,” the England captain said. “Clean sheets are important for us if we want to stay in the (fight for the) Champions League spots.

“We have to get back to what got us in the Champion League last year.”

Conte said he told his players he wanted them to be harder to beat and that they had responded well. The Italian coach looked emotional as he punched the air in front of Tottenham’s traveling supporters after the final whistle.

“Today we showed again that when we play as a team, it’s difficult to play against us,” Conte said.

“Now we have 17 games (left) and today has to be a stepping stone and try to give everything and see what happens. We have to stay in the race for the Champions League.”

Fulham faded after a bright start and missed a chance to jump above Tottenham into fifth place with a win.