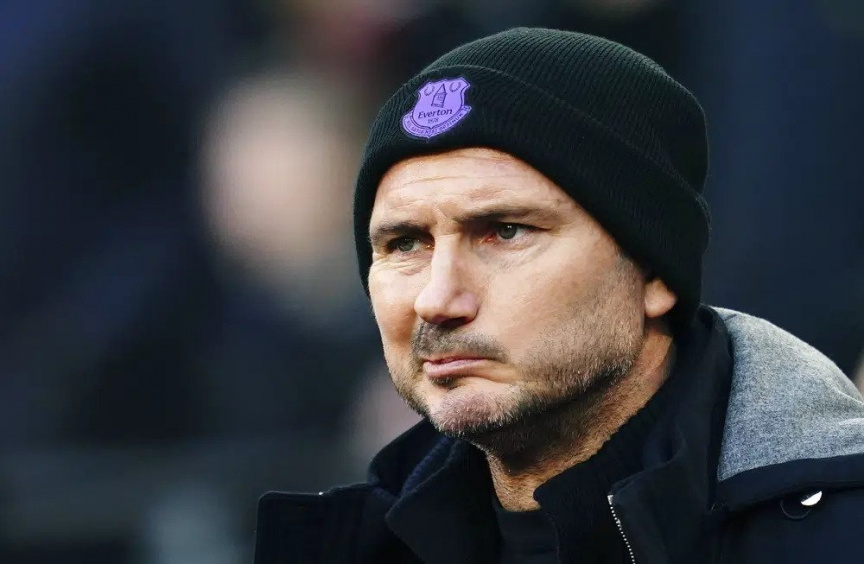 Everton manager Frank Lampard looks on, prior to the start of the English Premier League soccer match between West Ham United and Everton at the London Stadium, in London, Saturday, Jan. 21, 2023. ( Zac Goodwin/PA via AP)

Everton fired manager Frank Lampard on Monday as the crisis-hit Premier League team took action amid its latest fight against relegation and protests by disgruntled fans against the club’s board.

Lampard, a former England international and Chelsea great, lasted nearly a year in a role that is fast becoming one of the most challenging in English soccer, with Everton now looking for its eighth permanent manager since Farhad Moshiri bought the club in 2016.

Everton’s 2-0 loss at West Ham on Saturday was the team’s ninth defeat in its last 12 matches and proved to be Lampard’s final game in charge. He leaves with Everton in next-to-last place in the league after 20 of 38 games and with the same number of points as last-place Southampton.

The 44-year-old Lampard was hired last January and led Everton to safety in the final week of last season, extending its stay in the top division to a 69th year.

He has been unable to prevent the team from slipping into another relegation fight, though, with Everton winning only three games — the fewest of any team in the league — and scoring 15 goals.

“Frank and his team’s commitment and dedication have been exemplary throughout their time at the club,” Everton said in a statement released late Monday, hours after speculation emerged Lampard had departed, “but recent results and the current league position meant this difficult decision had to be taken.

“We wish Frank and all his backroom team well for their future in the game.”

Former Burnley manager Sean Dyche has been linked with the job along with Wayne Rooney, the England and Manchester United great who had spells at Everton at either end of his career. Rooney is currently coach at D.C. United in Major League Soccer.

In the meantime, Paul Tait and former Everton defender Leighton Baines will take training. The team’s next match isn’t until Feb. 4 — against league leader Arsenal — before a trip to Merseyside rival Liverpool on Feb. 13.

Fans have become increasingly irate at the club’s situation, focusing much of their frustration at Moshiri and the board. Before a home match against Southampton on Jan. 14, Everton said its board of directors were told not to go to Goodison Park because of what the club claimed to be a “real and credible threat to their safety and security” — citing “malicious and unacceptably threatening correspondence” and “targeted physical aggression.”

The club has not publicly released information about specific incidents relating to the threats.

Lampard is part of the new generation of managers given a chance in the Premier League in recent years, along with former England teammates Steven Gerrard and Scott Parker. All three have been fired already this season, with Gerrard leaving Aston Villa and Parker departing from Bournemouth.

Lampard previously was at Derby in the second division before joining Chelsea — where he is the record scorer with 211 goals — and lasting 18 months from 2019-21.

Under Moshiri, Everton has spent more than 600 million pounds ($740 million) on players but its recruitment has been characterized by poor planning and a lack of continuity in playing style. That’s because the club keeps changing managers, with Lampard following Roberto Martinez, Ronald Koeman, Sam Allardyce, Marco Silva, Carlo Ancelotti and Rafael Benitez since Moshiri’s arrival.

Everton has won nine top-flight league titles — the fourth most in English soccer behind Manchester United, Liverpool and Arsenal — but none since 1987. The club last collected a major trophy in 1995, when it won the FA Cup.

The drought won’t end this season because Everton is already out of both domestic cup competitions. Staying in the Premier League is the height of Everton’s ambitions, with the club desperate to be in the lucrative top flight by the time it moves into a new stadium at Bramley-Moore Dock for the start of the 2024–25 season.