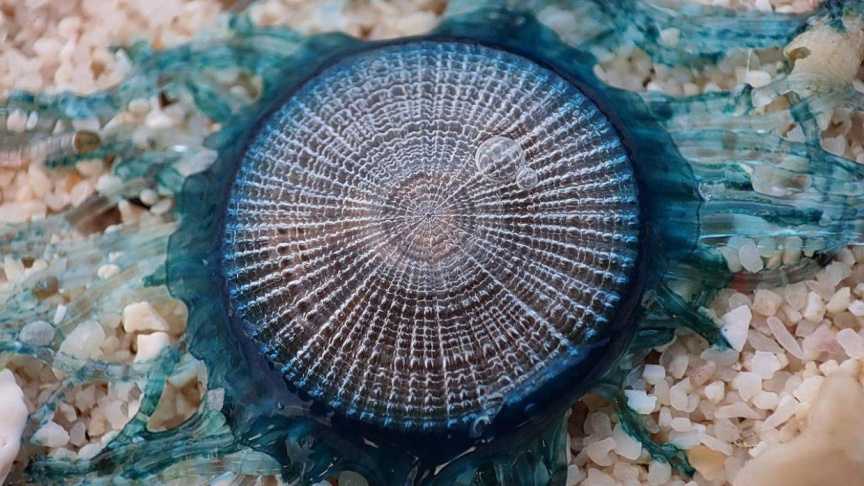 Blue buttons (porpita porpita) grace the shores of R. Rasmaadhoo at the beginning of every Iruvai Monsoon, attracting a large number of mesmerized beachgoers.

Blue buttons, locally known as ‘fulhangi thaakihaa’, are commonly thought to be jellyfish but actually are a tiny colony of hydroids, small predatory creatures distantly related to jellyfish.

Blue buttons don’t sting quite in the same way as jellyfish, but do have stinging cells that can cause skin irritation.

Rasdhoo Council’s vice president Abdul Hameed Hassan told Sun on Tuesday that blue button sightings are common in the island at the beginning of every Iruvai Monsoon.

“We know this happens when the monsoon begins. This is common every Iruvai Monsoon. Fishing is also better during this period,” he said.

Hameed said that blue buttons have strands that resemble tentacles of the jellyfish, which cause skin irritation.

He said that most locals avoid going into the water to swim when blue buttons begin to show up.

“The skin breaks out rashes exactly like an allergic reaction.  Its very itchy and uncomfortable. Its hard to identify it when its floating in the water because it’s the same color as the water,” he said.

“Its possible. The important thing is to avoid touching it. Because it may cause irritation and other such reactions,” he said.

Mayor concerned over delay in land use plan approval