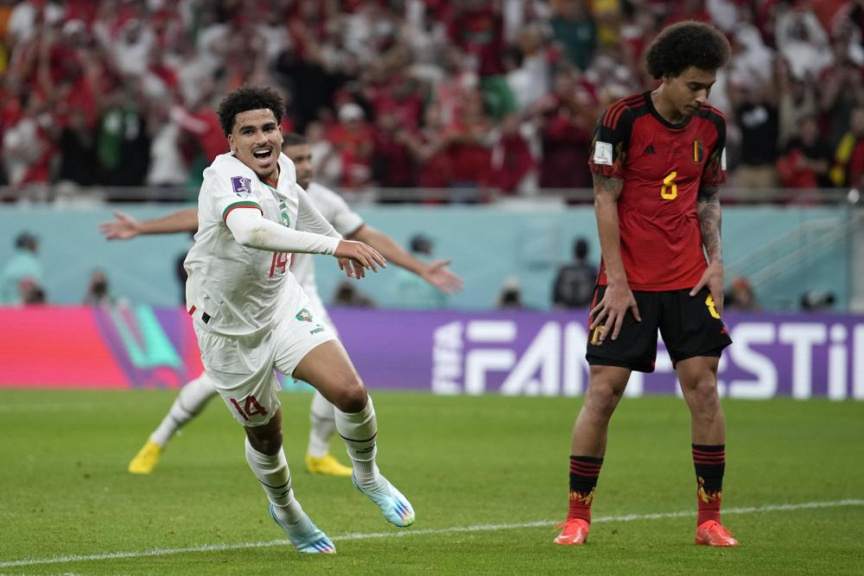 DOHA, Qatar (AP) — Morocco pulled off yet another World Cup shock on Sunday, and Belgium’s aging “Golden Generation” took the hit this time.

The 2-0 upset left Kevin de Bruyne and the 2018 semifinalists in peril of a group-stage exit at what is likely the final World Cup for a highly-talented Belgian group that haven’t managed to convert their promise into prizes.

De Bruyne didn’t drive Belgium forward against Morocco, captain Eden Hazard was taken off after an hour, and goalkeeper Thibaut Courtois was probably at fault for the opening goal.

“We haven’t seen the best Belgium yet,” said Roberto Martinez, a Spaniard who has coached the country’s national team for six years. “We haven’t been ourselves.”

Belgium could have become the second team behind defending champion France to advance to the last 16 if it beat Morocco. It now has a final group game against 2018 World Cup finalist Croatia to avoid its earliest World Cup elimination since 1998.

Morocco substitute Abdelhamid Sabiri gave his team the lead by whipping in the free kick from a tight angle on the left in the 73rd minute that got under the body of Courtois — for many, the best goalkeeper in the world.

Zakaria Aboukhlal guided a shot into the roof of the net off a pass from Hakim Ziyech in stoppage time to make it 2-0 as Belgium’s defense, boasting more than 300 international appearances but anchored by two players in their mid-30s, was beaten by a speedy 22-year-old forward playing at his first World Cup.

Morocco’s players kneeled and pressed their heads to the ground in prayer, then leapt up in celebration. Pulling himself up from the ground, Courtois just shook his head.

The second big upset at the first World Cup in the Middle East involved another Arabic nation. Saudi Arabia defeated Argentina in the opening set of group games.

Morocco, which was roared on by thunderous noise from its fans at Al Thumama Stadium, had started in Qatar with a promising 0-0 draw with Croatia.

“We are delighted with that after Croatia and Belgium,” Morocco coach Walid Regragui said. “That’s absolutely outstanding for Morocco.”

Belgium, ranked No. 2 in the world behind Brazil, had won its last seven group games at the World Cup before the upset, but that included a labored 1-0 win over Canada for the aging team to open the tournament.

Even De Bruyne said in a media interview before the World Cup that Belgium’s squad was likely too old to win now.

“I don’t think any comments will affect a result or a performance,” Martinez said, dismissing the suggestion that De Bruyne’s interview might have unsettled Belgium.

Morocco clinched its first win at a World Cup since 1998 and only its third ever and moved to four points in Group F.

Morocco has only ever been past the group stage once at a World Cup, in 1986. And things were in turmoil ahead of the tournament after former coach Vahid Halilhodzic was fired and Regragui was brought in at the end of August, less than three months before the World Cup. Regragui had only three friendlies to make his mark on the team before facing Croatia at the World Cup.

Regragui immediately recalled Ziyech, a Chelsea winger who was exiled from the team under Halilhodzic because of a rift between them. Ziyech curled in a disallowed free kick in the first half, set up the second goal, and was Morocco’s best player against Belgium.

Martinez brought on forward Romelu Lukaku, the country’s record scorer, as a substitute with less than 10 minutes to go in a desperate attempt to get one back when it was 1-0. Lukaku is only just returning from a left thigh problem and Belgium has missed him dearly. Martinez might be forced to start him against Croatia.

The final group games are on Thursday, when Morocco will come back to Al Thumama Stadium to play Canada. Belgium will face Croatia at the same time.

Aboubakar saves Cameroon in 3-3 tie with Serbia at WCup