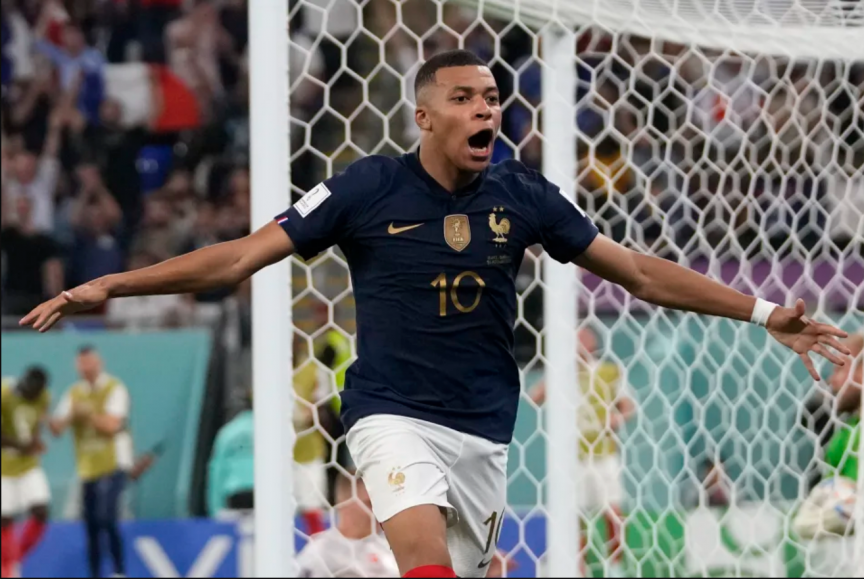 DOHA, Qatar (AP) — Kylian Mbappe scored two goals and put defending champion France into the knockout stage of the World Cup with a 2-1 win over Denmark on Saturday.

Mbappe gave his team the lead in the 61st minute and then scored the winner in the 86th with his right thigh as Les Bleus became the first team to advance to the round of 16.

The France forward swapped passes with Theo Hernandez down the left flank and poked the ball past Denmark goalkeeper Kasper Schmeichel for the first goal. He then jumped acrobatically to guide in the second after a cross from Antoine Griezmann.

Denmark defender Andreas Christensen equalized for his team with a header in the 68th.

Mbappe scored four goals when France won the World Cup four years ago, including one in the final. He now has 31 goals for France, moving him one ahead of Just Fontaine — the all-time leading scorer at a single World Cup with 13 goals at the 1958 tournament.

France beat Australia 4-1 in its opening game while the Danes drew 0-0 with Tunisia. The Aussies beat Tunisia 1-0 earlier Saturday.

With Ballon d’Or winner Karim Benzema missing from the tournament with a leg injury, Mbappe has taken charge. He has 14 goals in his past 12 games for France, including three so far in Qatar.

The Danes beat France twice this year in the Nations League but looked tame in attack at Stadium 974 — on the rare occasions they even got near France’s penalty area.

Central defender Raphael Varane returned to France’s defence for his first game since sustaining a hamstring injury playing for Manchester United on Oct. 11. The 2018 World Cup winner made his 88th international appearance and played 75 minutes before being replaced.

Forward Marcus Thuram came on in the second half as his father, Lilian Thuram, watched from the stands. The elder Thuram was a standout defender who helped France win its first World Cup in 1998.

The final Group D games are scheduled for Wednesday, when France will play Tunisia and Australia will face Denmark.

Messi leads Argentina to 2-0 win over Mexico at WCup