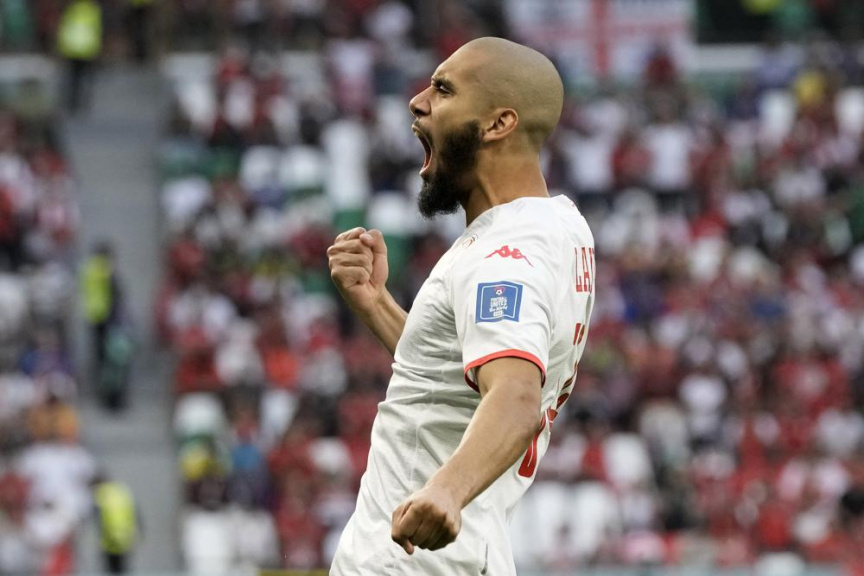 AL RAYYAN, Qatar (AP) — Arab teams are making an impact at the first World Cup in the Middle East.

Before a stadium filled almost entirely with Tunisia’s red-clad supporters, midfielder Aïssa Laïdouni set the tone in the very first minute when he stripped emblematic Denmark playmaker Christian Eriksen of the ball with an aggressive sliding tackle — then stood up and pumped his arms menacingly, gesturing to the crowd to get even more fired up.

“I’m always proud to represent Tunisia and we always go on the pitch 100% committed,” Laïdouni said through a translator.

Tunisia likely deserved more but an expert save shortly before halftime by goalkeeper Kasper Schmeichel helped Denmark preserve the draw.

Having already gone down to the grass after Tunisia broke through the defense, Schmeichel stuck his hand up to deflect a shot from Issam Jebali, who plays his club ball in Denmark for Odense.

It was just the sort of save that the keeper’s father, former Manchester United great Peter Schmeichel, used to pull off.

“We wanted to win a point at least,” Laïdouni said. “We didn’t come to get a draw. We wanted to get the win, and I think we did have chances for that, but at the end of the day we’re happy with the draw.”

The match marked Eriksen’s return to a major tournament less than a year and a half after his cardiac arrest with Denmark at Euro 2020.

Assuming his customary playmaker position, Eriksen produced a dangerous long-distance shot on goal in the second half that Tunisia goalkeeper Aymen Dahmen had to bat away.

And on the ensuing corner, Denmark hit the post.

Tunisia also survived the chance of a last-minute penalty for Denmark but the referee ruled to play on after a video review for a possible handball.

Denmark has been one of the most outspoken critics of the tournament in Qatar and during the pre-match warmup its players wore all black long-sleeve shirts over their red game jerseys to mourn migrant workers who died building infrastructure for soccer’s biggest event.

Denmark was also planning on wearing the “One Love” anti-discrimination armband along with other European teams before the campaign was dropped when FIFA threatened to hand out yellow cards.

However, former Danish Prime Minister Helle Thorning-Schmidt, who is now chair of the Danish soccer federation’s governance and development committee, was at the stadium wearing a coat with some subtle rainbow coloring.

Denmark has lofty goals following its performance at last year’s Euro 2020 and a near-perfect qualifying campaign, while Tunisia is seeking to advance from the group stage for the first time in its sixth World Cup appearance.

After a lack of atmosphere at several of the opening matches, the huge number of Tunisian fans inside Education City Stadium made it feel like a home match for the North African team. Tunisia fans chanted, banged drums and blew air horns when their squad had the ball — then hissed and whistled loudly whenever Denmark had possession.

In the end, both teams produced 13 shots.

While saying it “is not an excuse,” Denmark coach Kasper Hjulmand said that finding ways to protest against Qatar has been a distraction.

“I’m only talking for myself when I say I find the situation difficult right now.”

Tunisia is not known for its attacking prowess but coach Jalel Kadri said the big crowd support helped his team raise its tempo.

“It lifted our spirits,” Kadri said. “Mentally it gives us a great lift. It really helped us. But tactically and physically we also played very well.”

Tunisia will next play Australia on Saturday in Group D and Denmark will meet defending champion France on the same day.

Messi leads Argentina to 2-0 win over Mexico at WCup