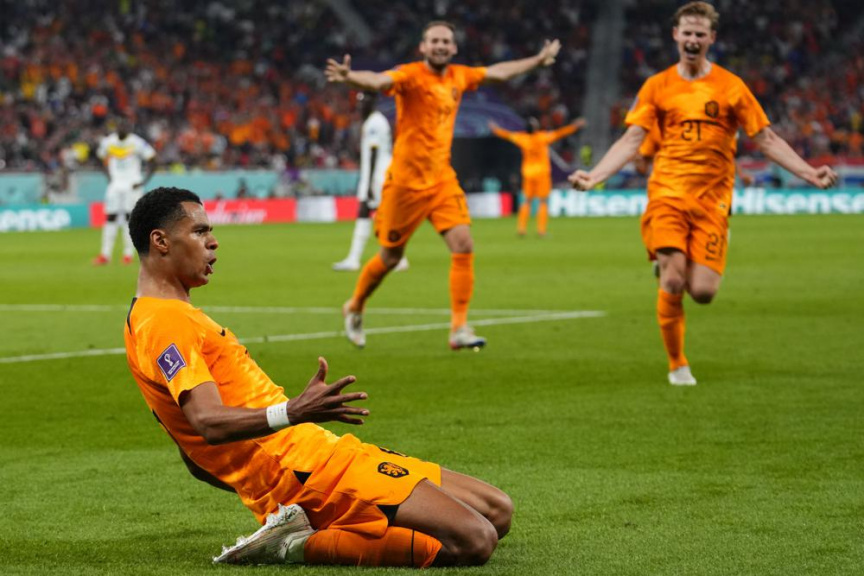 Cody Gakpo of the Netherlands celebrates scoring the opening goal during the World Cup, group A soccer match between Senegal and Netherlands at the Al Thumama Stadium in Doha, Qatar, Monday, Nov. 21, 2022. (AP Photo/Petr David Josek)

DOHA, Qatar (AP) — Louis van Gaal’s gambles at both ends of the field paid off for the Netherlands.

Up front, Memphis Depay returned from injury as a second-half substitute to help spark the attack into life as the Netherlands scored two late goals to beat Senegal 2-0 Monday at the World Cup.

At the back, Netherlands goalkeeper Andries Noppert pulled off three key saves to keep the African champions at bay after Van Gaal decided to give him his international debut in a key World Cup game and just two months after he was called into the national squad for the first time.

“His quality is he can stop balls and he did that three times today,” the Netherlands coach said, “and he did it perfectly.”

Cody Gakpo and substitute Davy Klaasen provided the late goals to ensure the Dutch team’s winning start at its first World Cup appearance since 2014, when Van Gaal was also coach.

Gakpo rose to glance a header in from a cross by Frenkie de Jong in the 84th minute with the team’s first effort on target. Klaasen added a second right at the end of eight minutes of stoppage time by slotting in after Senegal goalkeeper Edouard Mendy only weakly blocked a shot from Depay.

The orange-shirted Dutch fans had been subdued until the late strikes as Senegal was the more energetic team. The Senegalese drums and chants were the dominant sound from the stands for much of the game.

But Senegal’s main problem was predictable: Without injured forward Sadio Mane, it couldn’t convert any of its chances.

“I think we gave everything and I think we deserved at least a point from this game,” Senegal coach Aliou Cisse said. “But, of course, Sadio being missing is a problem for us.”

Depay, who has only just recovered from a hamstring injury, was put on by Van Gaal with about 30 minutes to go after the veteran coach said the day before that he wasn’t sure if the Barcelona forward was ready for action.

He decided to see if he was and Depay responded by playing parts in both goals.

First, he linked up with De Jong near the edge of the area before the midfielder crossed to Gakpo for the first goal. Depay’s run and shot deep in injury time led to the second goal for Klaasen — one of four substitutes in the match. It sealed a Dutch victory and a 16th game unbeaten for the Netherlands since the 71-year-old Van Gaal, the oldest coach at the World Cup, returned from retirement last year to lead his country for a third time.

The substitutions provided “the breakthrough,” Van Gaal said. “Memphis was a big part of that.”

The long injury time — it stretched out to nearly nine minutes — was partly because of a serious-looking injury to Senegal central midfielder Cheikhou Kouyate, who left on a stretcher clutching his right leg. Cisse watched solemnly as one of his most important midfielders was carried off in the first game since the team lost Mane for the entire World Cup to a right leg injury.

Senegal won the African Cup at the start of the year and was heralded as maybe the best African team to ever come to a World Cup. Without Mane and now with an opening game loss, it’s in a scrap to make it out of the group stage.

Few people were talking about the Dutch coming into this World Cup, but their record is highly impressive under Van Gaal and they’re now through what he had identified as their toughest test of the group stage.

“A 2-0 victory against the champions of the African Cup. I can be very very pleased,” Van Gaal said.

The Netherlands can secure a place in the round of 16 if the team beats Ecuador in its next game. Senegal faces a must-win against host Qatar.

Bale salvages 1-1 draw for Wales against US in WCup