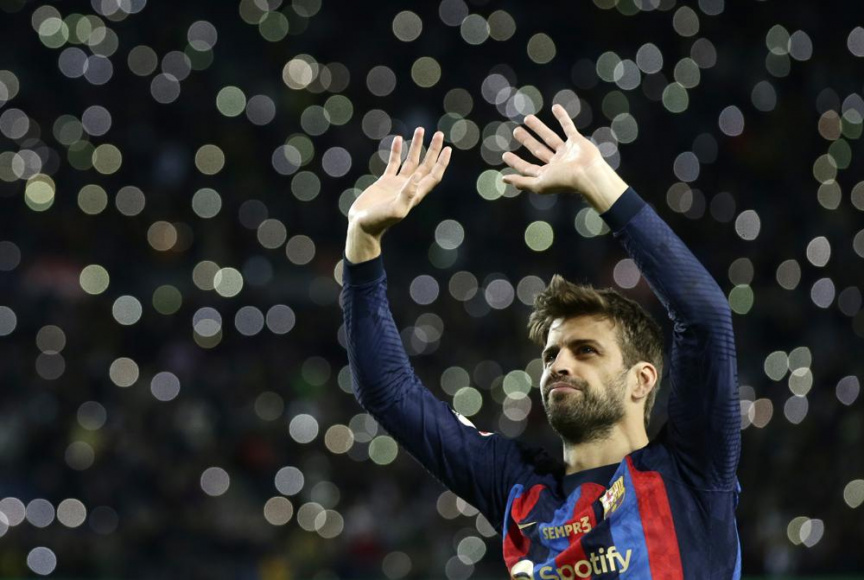 BARCELONA, Spain (AP) — Gerard Pique kept his composure until he began to tell the 92,000 crowds how much he loved his boyhood club.

Then, the tears flowed uncontrollably for the 35-year-old Barcelona defender and multi-trophy winner as it sunk in that he would never play for his home fans again.

Pique played his last match at Camp Nou on Saturday, making his 616th appearance for Barcelona in a farewell that was sweetened by a commanding 2-0 win over Almeria that lifted the hosts to the top of the Spanish league.

He was applauded after the first touches he made and when he was substituted late on. He hugged each of his teammates and waved to the crowd, which gave him a standing ovation.

After taking a lap of honor around Europe’s biggest soccer stadium, Pique took up a microphone to say that he plans to return to the club in the future, but not as a player. In the past, he has said that one day he may consider running for club president.

“In life, when you grow up, sometimes to love is to let go,” he said before breaking down.

“There is so much love, so much passion between Barça and me that it was time to give us some space, some air, and I am convinced that in the future I will be back. My grandfather made me a club member the day I was born. I was born here and will die here. Long live Barça forever.”

Pique, a world and European champion with Spain and a three-time Champions League winner with Barcelona, made the unexpected announcement this week that this would be the final home game of his 14-year career with the Catalan club. He said that he would not play for any other team.

After Robert Lewandowski missed an early penalty, Ousmane Dembélé opened the scoring against the outclassed Almería in the 48th minute and Frenkie de Jong put the result beyond doubt in the 62nd.

The win lifted Barcelona two points ahead of Real Madrid before it plays at Rayo Vallecano on Monday.

A skilled passer and scorer from his position of center back, Pique was a part of Barcelona’s most storied teams alongside Lionel Messi, Andrés Iniesta, and current coach Xavi Hernández. He helped Barcelona win 30 titles, including eight Spanish leagues and seven Copa del Rey crowns.

Pique scored 52 career goals for Barcelona and shares the record for most Champions League goals scored by a defender on 16, along with former Real Madrid left-back Roberto Carlos.

In his youth, Pique played with Messi and Cesc Fabregas as part of a golden generation of youngsters at Barcelona’s “La Masia” training academy. After a stint at Manchester United, he returned in 2008 and immediately became a starter with Carles Puyol in the heart of the defense. He then partnered over his long career with several center backs, including Javier Mascherano, Samuel Umtiti, Clement Lenglet, and, most recently, Ronald Araújo and Éric García.

For Spain, he helped win the 2010 World Cup and the 2012 European Championship before retiring from international soccer in 2018.

Pique was a Barcelona fan favorite for his verbal digs at fierce rival Real Madrid over the years.

But with the arrival of Jules Koundé, Andreas Christensen, and Marcos Alonso this summer, Xavi demoted Pique to a rarely used backup for the first time in his career.

“He leaves behind a very important legacy of leadership, bravery, and of playing with character. He is what Barcelona’s colors need,” Xavi said. “Gerard formed part of an extraordinary era, and our task is to try to live that again.”

Sergio Busquets, who is now the only remaining member of the best Barcelona team of former coach Pep Guardiola, called Pique “an example of what a Barcelona player should be.”

While he will be missed by his teammates, his exit will help reduce the salary burden of the indebted club.

Pique can now focus on his business ventures, which include the revamped Davis Cup for tennis, and sorting out his personal life following his recent breakup with pop star Shakira.

Lewandowski hit the outside of the post with a seventh-minute penalty after Kaiky Fernándes had used his arm to stop a header by Ferran Torres.

Dembélé finally broke through just after halftime. He received a long ball from Busquets on the right flank, slalomed past two defenders to the edge of the area, and slotted a shot just inside the post.

De Jong smashed in the second after goalkeeper Fernando Martínez did well to save a point-blank shot by substitute Ansu Fati.

Osasuna’s Chimy Ávila scored twice to lead Osasuna to a 2-1 win at Celta Vigo and spoil the debut of Carlos Carvalhal in the Portuguese coach’s first match since replacing the fired Eduardo Coudet.