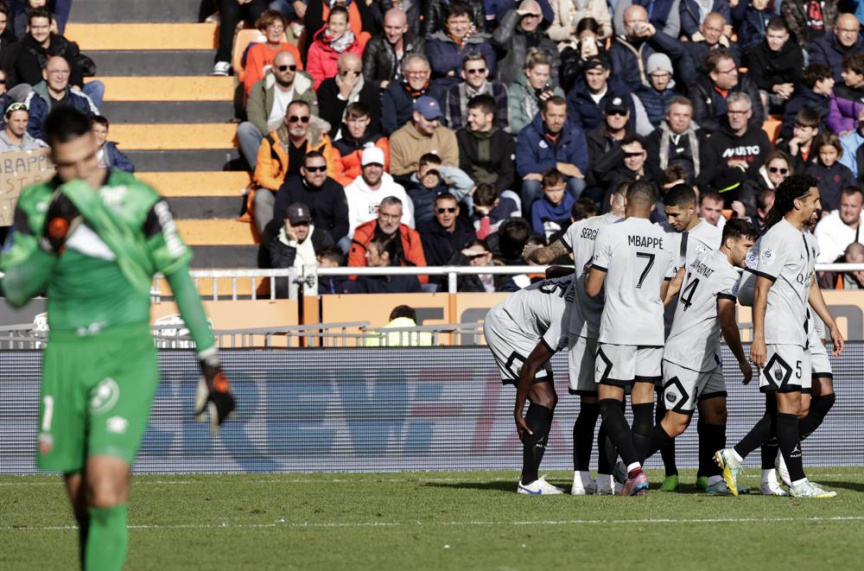 PARIS (AP) — Paris Saint-Germain needed a late goal from defender Danilo Pereira on Sunday to scrape a 2-1 win at Lorient and restore its five-point lead at the top of the French league.

But PSG coach Christophe Galtier accepted his side struggled at times.

“We were sloppy technically,” he said. “We looked rattled in the second half.”

Lionel Messi was rested for the game because of some inflammation in his Achilles tendon. The Argentina star, who will look to win the World Cup for the first time in his stellar career, is expected to resume training next week.

Galtier thinks some PSG players may have been holding back against Lorient for fear of getting injured so close to the tournament, as happened to Germany’s Timo Werner.

“It gets inside the players’ minds when they hear that such and such is injured, and won’t play at the World Cup,” Galtier said. “Certain players held back a bit, were a little bit worried about tackling.”

Galtier gave assurances that France striker Kylian Mbappe only came off near the end because of general muscle fatigue, and nothing else.

“He’s been playing a lot of matches,” Galtier said. “But there’s nothing to worry about. He already came off feeling tired against Juventus (in the Champions League) on Wednesday.”

Messi was replaced in attack by 20-year-old Hugo Ekitike, who marked a rare start by setting up Neymar’s opening goal after nine minutes. Neymar’s 11th league goal moved him level with Mbappe atop the scoring charts.

Lorient equalized in the 53rd through club top scorer Terem Moffi’s ninth goal of the campaign.

Moffi hit the crossbar shortly after as Lorient got on top, but then failed to pick up Pereira from Neymar’s corner.

The home side led through 38-year-old defender Jose Fonte’s early goal, but midfielder Benjamin Bourigeaud equalized for Rennes with a penalty in the 58th.

Rennes is only one point ahead of fourth-place Marseille, which beat Lyon 1-0 at home for a first win in five league games.