Paul Pelosi released from hospital a week after assault 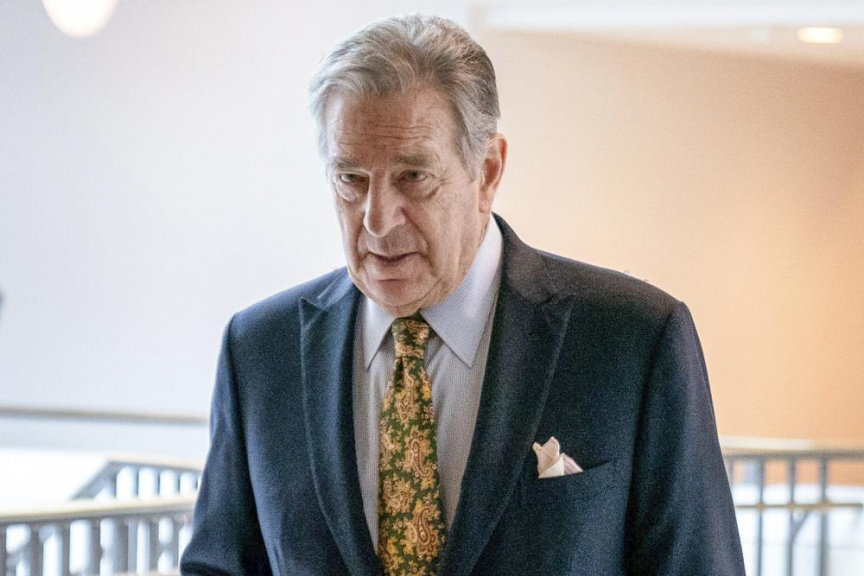 FILE - Paul Pelosi, right, the husband of House Speaker Nancy Pelosi, of California, follows his wife as she arrives for her weekly news conference on Capitol Hill in Washington on March 17, 2022. (AP Photo/Andrew Harnik, File)

House Speaker Nancy Pelosi said her husband, Paul Pelosi, was released from the hospital Thursday after his treatment for injuries from a violent assault last week in which he was attacked with a hammer.

Pelosi said, “Paul remains under doctors’ care as he continues to progress on a long recovery process and convalescence. He is now home.”

Law enforcement officers who responded to the break-in early last Friday witnessed Paul Pelosi being struck in the head with the hammer at least once, according to court documents. Officials said the assault was captured on the officers’ body cameras.

Pelosi was taken to Zuckerberg San Francisco General Hospital and Trauma Center. Speaker Pelosi said her husband was grateful to the 911 operator who directed police to the family residence, emergency responders, ICU staff and the entire hospital staff for “their excellent and compassionate life-saving treatment.”

“The Pelosi family is thankful for the beautiful outpouring of love, support and prayers from around the world,” she said.

David DePape, 42, legally entered the United States in 2000 and later left the country and returned a few times, including entering in March 2008 at San Diego’s San Ysidro border crossing, said a U.S. official who spoke on the condition of anonymity because they were not authorized to discuss the matter.

Most Canadians are not required to obtain a visa to enter the U.S. as tourists and can stay for up to six months. The official said it was unclear why U.S. authorities admitted DePape after he overstayed his entry in 2000.

The Department of Homeland Security did not immediately respond to questions about DePape’s entry to the United States after he violated immigration law. It acknowledged in a statement that DePape was allowed into San Diego from Tijuana on March 8, 2008, but didn’t address any other entries.

San Francisco police said DePape confronted Paul Pelosi in the family’s Pacific Heights home Oct. 28 and demanded to know where the House Speaker was. DePape pleaded not guilty to state charges on Tuesday and was ordered held without bail. His public defender, Adam Lipson, said he looks forward to providing him with a “vigorous legal defense.”

DePape faces state charges of attempted murder, burglary and elder abuse. He also faces federal charges including attempted kidnapping of a U.S. official. His state case will continue Friday, though the defendant will not appear in the courtroom. An arraignment on federal charges has not been scheduled.

In the state court filing, prosecutors detailed the attack in stark terms, saying Paul Pelosi, 82, was knocked unconscious by the hammer attack and woke up in a pool of his own blood.

DePape grew up in Powell River, British Columbia, but relocated to California to be with a girlfriend, stepfather Gene DePape told The Associated Press last week. He has three children with two women, he said. Gene DePape said the suspect had lived with him in Canada until he was 14 and had been a quiet boy.

DePape’s ex-girlfriend, Bay Area nudist activist Oxane “Gypsy” Taub, told the San Francisco Chronicle she met DePape in Hawaii in 2000. The pair lived in Berkeley and had two children during their 15-year relationship.

U.S. officials have long struggled to quantify — let alone track down — people who enter the country legally and overstay visas, believed to be about 40% of the population who are in the country illegally.

There were 684,499 visa overstays from October 2019 through September 2020 among visitors who arrived by plane or ship — more than the population of Vermont or Wyoming – according to the Department of Homeland Security’s latest annual report. The total number of overstays is much larger but has not been quantified because it doesn’t include how many people arrive by land, the primary way for Canadians and Mexicans to enter the United States.

The cost and technological hurdles to develop a checkout system at congested land crossings with Canada and Mexico are enormous. In the 12-month period through September 2020, more than 52,000 Canadians who came to the U.S. by air or sea had overstayed their legally authorized entry.

Despite the challenges, the U.S. official said DePape’s overstay should have been noted in immigration records, which, in theory, should have prevented authorities from admitting him.