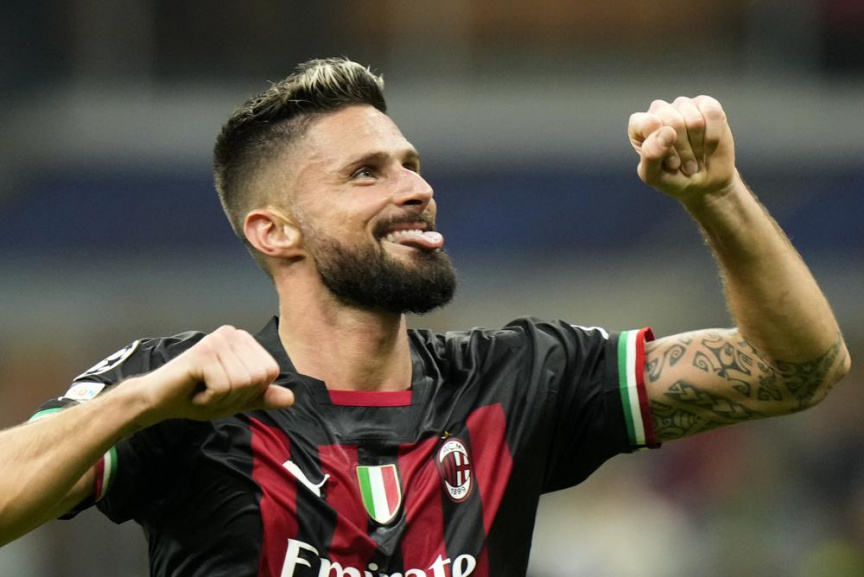 MILAN (AP) — Olivier Giroud has a knack of delivering in big games.

He did it again on Wednesday with two goals and two assists as AC Milan beat Salzburg 4-0 to return to the Champions League knockout stages for the first time in nine years.

Giroud opened the scoring in the 14th minute and then all but sealed Milan’s progression in the 57th after he had set up Rade Krunić for his first Champions League goal in the opening minute of the second half. Junior Messias capped a wonderful night for the Italian champion.

It was the 36-year-old Giroud’s goals in crucial matches last season that helped Milan end its 11-year wait for the Serie A title and earned him a recall to the France squad in September, hoping to stake a late claim for a place in the World Cup.

“He’s a player and person of great depth, a really great leader and he’s doing things that a player of his level should do,” Milan coach Stefano Pioli said. “He’s a reference point and is helping us a lot to grow.”

Throughout his career, Giroud has earned a reputation for coming up with the goods in important moments. His crucial goals late in the 2019-20 season spurred Chelsea to qualify for the Champions League, and his six goals in the competition helped the London club win the European title for the second time.

“This is only the first step, mentally we mustn’t stop,” Pioli said. “Because wanting to be successful in Europe doesn’t mean being satisfied with the last 16 but wanting to go further. This is a group that has always shown great motivation and great hunger to do everything possible and even more sometimes.”

Milan needed at least a point from its final group match to advance while only a win would do for Salzburg and it was an aggressive start from both sides.

The hosts almost got off to the perfect start but Theo Hernández’s angled drive came off the base of the right post with less than three minutes on the clock.

Salzburg also went close to an early opener but Milan defender Fikayo Tomori did brilliantly to race across the area and fling himself at Maurits Kjaergaard’s shot like a human shield.

Moments later, Milan did break the deadlock when Sandro Tonali whipped in a corner from the left for Giroud to rise almost unchallenged and head into the far bottom corner.

Giroud thought he had doubled his tally in the 26th when he tapped in a rebound after Philipp Köhn had spilled Hernández’s shot but it was ruled out for offside.

Salzburg had appeared dangerous before the break but Milan all but killed it off immediately after the restart. Ante Rebić floated in a cross from the right and Giroud nodded it back into the middle for Krunić to head into the top left corner.

Salzburg then gifted Milan a third as two of its players got into a tangle when going for a ball from Rafael Leão right in front of goal, allowing Giroud to fire in his second of the night.

Leão also hit the crossbar before substitute Junior Messias scored a delightful goal in stoppage time after being picked out on the right by Giroud.