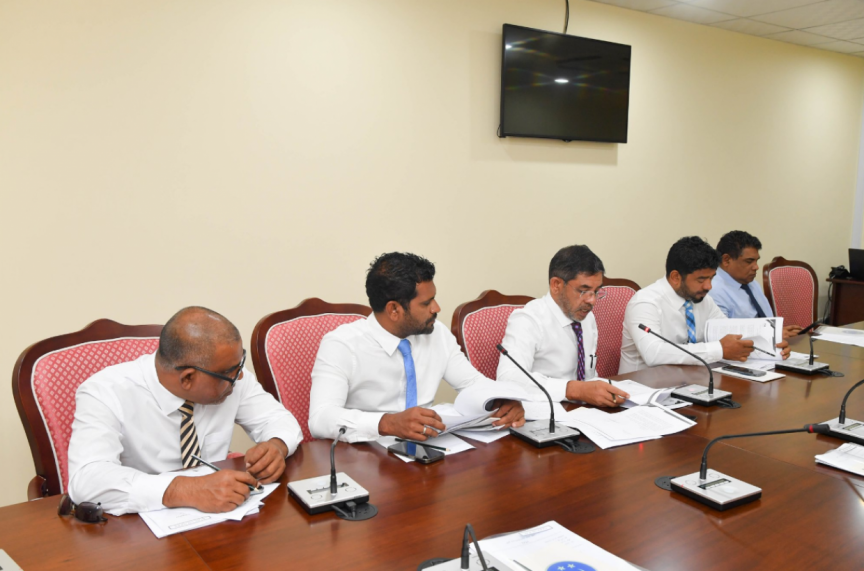 Parliament’s Committee on State Owned-Enterprises (SOE), on Tuesday, has decided to conduct an audit of Public Service Media (PSM) through the Auditor General’s Office (AG Office) over allegations made by the company’s former Chief Internal Auditor MVR 100 million corruption within PSM.

In a meeting of the Committee held on Tuesday – Dhidhdhoo MP Abdulla Waheed proposed Privatization and Corporatization Board to conduct an assessment of the case, and submit a report to the Committee. Meanwhile, Feydhoo MP Mohamed Nihadh proposed to conduct an audit of PSM via AG Office. Both proposals were passed by the unanimous votes of all members in attendance.

SOE Committee had met with both Fazeel and senior officials from PSM as part of their probe into the allegations. When Fazeel was summoned to the Committee, he claimed that PSM’s Internal Audit Department had reviewed 30 cases, and submitted 14 subsequent reports to company’s board at the end of last year – which no action was taken over.

Meanwhile, PSM’s Chairman Ibrahim Hilmy and Managing Director Ali Khalid said that Fazeel did not carry out much work during his tenure. They stressed that the company was forced to dissolve its Internal Audit Department over the lack of results produced.

Khalid also said that none of the reports mentioned by Fazeel has been received by the board.

Hilmy also backed Khalid – stating that the reports received by the board were from a special committee formulated by Khalid.

Khalid further stated that upon first assuming the post of PSM’s managing director, his priority was to submit suspected corruption cases to the Anti-Corruption Commission (ACC).

Khalid said that following submission of the cases to ACC, they were closely inquiring and monitoring the progress of the cases with the corporation. He added that a meeting was later held with the Prosecutor General, where the cases were discussed; a meeting during which the company requested all possible actions pertaining to them.

He said the cases were also submitted to the parliament.

In this regard, installation of antenna at Adi Park, and establishing the system to release medium waves were not contracted to the most capable company undertaking the work during the former administration.

Fazeel said that although the work was contracted to a Sri Lankan company later on, the agreement executed had become void.

He alleged that contracting the work to the same Sri Lankan company again by the current MD Khalid was at a loss of MVR 18 million to the government.

Refuting these allegations, Khalid said that the current management of PSM, since assuming office, has not done anything that may lead to corruption.

Explaining the situation, Khalid said that the project was offered to the Maldives by Japan through grant assistance in 2012.

He said although the project dated back to 2012, he said work on it had only commenced in 2017.

“The project was being carried out, and by mid-2018 the project’s agreement had expired. When 2018 concluded, and the resumption of the project was looked at, there was a new management,” he detailed.

Khalid said that when he was appointed to PSM, the whole of Maldives did not receive radio signal, with some regions not receiving the signal to any extent.

He said the reason behind some regions not receiving the Dhivehi Raajeyge Adu’s signal was the removal of the antennas in Adi Park. He added that this prompted a lot of complaints from the public as a new management was in place at the time.

Khalid said that when questions arose regarding former board’s award of Adi Park antenna project to the Sri Lankan company, ACC had probed the case. He added that PSM was later informed by ACC of no issues regarding the matter.

Khalid detailed that when the former management inquired why the project had failed to proceed accordingly, the contractor had attributed it to negligence by the PSM.

He said at the time, Dhivehi Raajeyge Adu could not broadcast on medium wave frequency, as a result of which radio services provided through medium wave were halted. Khalid said work on the project resumed in order to resume the medium wave service as soon as possible.

“Hence, the project’s issue was probed by a member of PSM’s legal department, a technical person and a person who oversaw the project. The probe findings had shown some issues,” he had said.