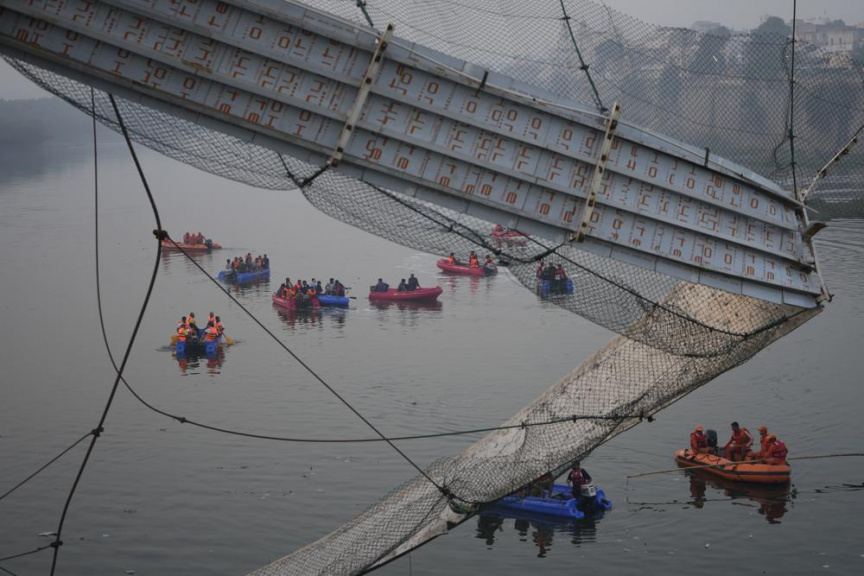 Rescuers on boats search in the Machchu river next to a cable suspension bridge that collapsed in Morbi town of western state Gujarat, India, Monday, Oct. 31, 2022. (AP Photo/Ajit Solanki)

The cable suspension bridge had stretched across the Machchu river in Morbi town of western state of Gujrat. The collapse of the densely packed bridge is one of India’s worst accidents in years.

In a tweet on Monday, in which he tagged his Indian counterpart Dr. Subrahmanyam Jaishankar, Shahid said he was deeply saddened by the loss of lives in the tragedy.

“Deeply saddened by the loss of lives in the tragedy that has struck with the collapse of the suspension bridge in Morbi, Gujarat,” he said.

Shahid said the thoughts and prayers of the Maldivian people are with the families of the victims.

“Wishing for a swift rescue effort and a speedy recovery for those injured,” he added.

Indian authorities said the structure collapsed under the weight of hundreds of people. Security footage of the disaster showed bridge shaking violently and people trying to keep hold of its cables and green-colored metal fencing before the aluminum walkway gave way and crashed into the river.

Visuals from the disaster site showed the bridge split in the middle and the metal walkway hanging down, its cables snapped in places.

Survivors said it was so densely packed that the crowd was unable to quickly move to safety when its cable began to snap.

Indian Prime Minister Narendra Modi, visiting his home state of Gujarat, said he was “deeply saddened by the tragedy.” His office announced compensation for families of the dead and called for speedy rescue efforts.