Payam: Relinquishing claim over Chagos does not mean loss of part of Maldives' EEZ 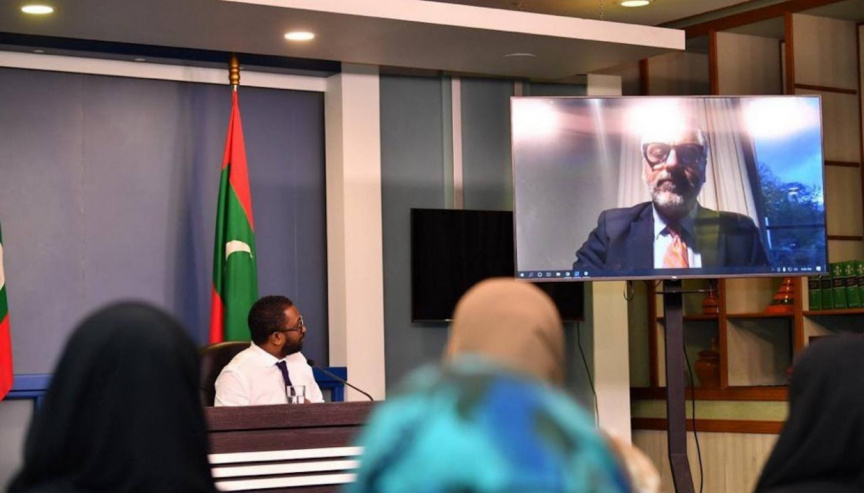 The lead counsel of the team representing Maldives in the International Tribunal for the Law of the Sea, Professor Payam Ahawan has stated that handing over the Chagos archipelago to Mauritius will not result in loss of a part of Maldives' exclusive economic zone.

Speaking in a press conference held by the President's office on Monday, regarding the issue surrounding Chagos, the lead counsel of the team, Payam, disclosed that if there are any overlaps regarding the 200 miles granted to every country as their exclusive economic zone, the part that is overlapping has to be divided as per the rules and regulations surrounding such issues and that it is not losing that it is not considered losing that country's designated economic zone.

He highlighted that the disagreement persists between Maldives and Mauritius only regarding how to divide the overlapping boundary as per the International Maritime Law and further explained that no matter what the verdict the Court ultimately settles on, no country will get the area entirely.

"It is not a football match where you can say who won and who lost, very often what tribunals do is, they try to achieve some kind of compromise drawing a line doesn't give everything to one side but gives something to each side," he said.

He said that the United Nations' International Court of Justice has previously ruled that Chagos is a part of Mauritius' boundary, and so despite Maldives claiming that area as theirs, there is no way that that can be considered true.

This issue has agitated Maldives' political climate. There are accusations that the government is releasing the boundary in a way that negatively affects Maldives.

On the heels of this decision, the Attorney General's office emphasised that the issue surrounding the UN general assembly voting procedures and the ongoing issue of finalising Maldives' border by the tribunal are separate issues. The Attorney General's office further elaborated that Maldives voting in favour of Mauritius in the UN general assembly does not mean that Maldives has changed their stand regarding the ongoing hearings in the tribunal against Mauritius.

Chanaachaa: Buy a VIP ticket for chance to meet Yohani