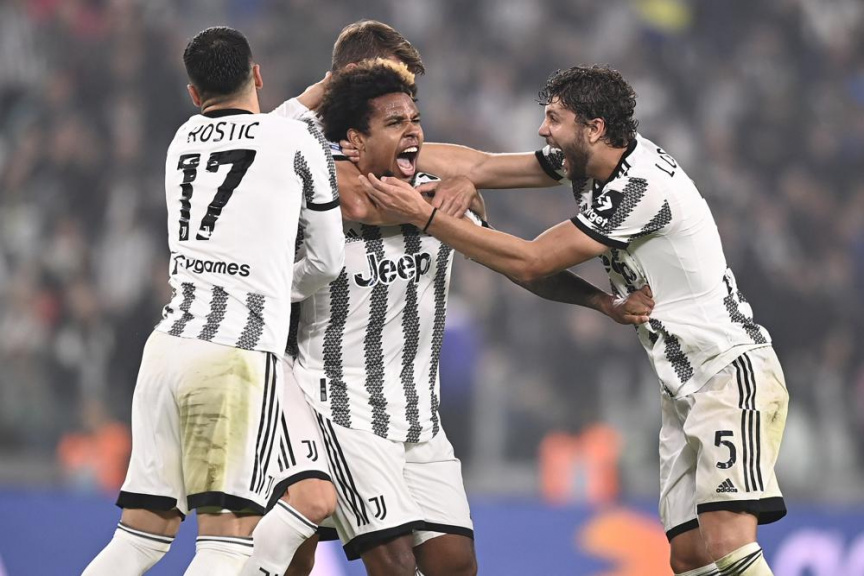 Juventus' Weston McKennie, center, celebrates after scoring his side's second goal of the game during the Italian Serie A soccer match between Juventus and Empoli at the Juventus Stadium in Turin, Italy, Friday, Oct. 21, 2022. (Fabio Ferrari/LaPresse via AP)

TURIN, Italy (AP) — Juventus could be back on track after a dismal few weeks for the Bianconeri.

Adrien Rabiot scored twice late on to add to goals from Weston McKennie and Moise Kean as they beat Empoli 4-0 on Friday for their second straight victory.

Juventus was still seven points behind Serie A leader Napoli, having played a game more, but it was a timely confidence boost ahead of the must-win match at Benfica in the Champions League.

Anything but a win on Tuesday would see Juventus eliminated from the competition at the group stage, following last week’s humiliating 2-0 loss to Maccabi Haifa.

That came days after Juventus also lost in Serie A by the same scoreline, against AC Milan.

However, it managed to beat Torino in the city derby last week and was also boosted by the return of Paul Pogba and Federico Chiesa to training, although the duo was not ready for Friday’s match.

Juventus got off to the perfect start as Rabiot whipped in a cross from the left for Kean to head his side in front in the eighth minute.

Kean also headed wide from a good position later in the half, while Empoli goalkeeper Guglielmo Vicario did well to parry from McKennie at point-blank range.

McKennie got his goal in the 56th when he headed in a corner.

It was the American’s first Serie A goal since Jan. 15 against Udinese. His only other goal this season was in September in a 2-1 defeat at Paris Saint-Germain.

Kean had a goal disallowed for offside before Rabiot headed in another corner eight minutes from time.

Rabiot doubled his tally in stoppage time by tapping in at the back post after Manuel Locatelli sent Danilo down the right and he rolled across the box for the France international.