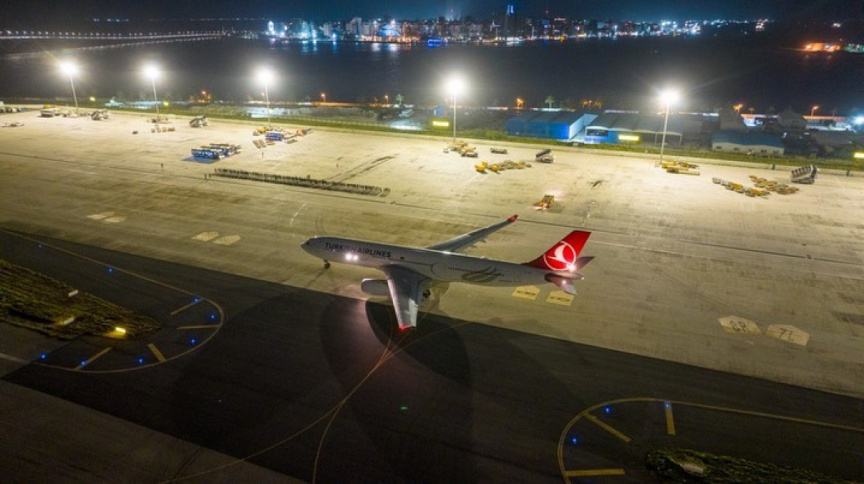 The last flight departs from the old runway at Velana International Airport on October 5, 2022. (Photo/MACL)

A number of Velana International Airport (VIA) staff on duty gathered at the runway on Wednesday night in a moment which will be written in Maldivian history; to bid goodbye to the last airplane departing from the runway, that served as Maldives’ main gateway to the world for the past 60 years.

The last airplane to depart from the runway built by the hard work of Maldivians 60 years ago belonged to Turkish Airlines – taking off at 23:00pm on Wednesday night.

Use of the runway ceased with the operationalization of a newly developed Code F runway at VIA, capable of accommodating the largest passenger airlines in the world.

Hulhule’, the island where Maldives’ main airport lies, was previously just an inhabited island like any other across the archipelago. Hulhule’ was the capital of Male’ Atoll, boasting exceptional natural beauty. Residents of the island practiced agriculture and fisheries.

A runway was first developed at Hulhule’ by the British, during the time Maldives’ was under British protectorate for the purpose of linking the capital Male’, with Gan in Addu Atoll, where the British’s main base was established.

Made with slotted steel, the first aircraft landed on the small runway on October 19, 1960; a British military plane. With permission of the British, the Government of Maldives also utilized the runway, particularly in circumstances that required senior government officials to travel to neighboring Sri Lanka.

The first strain between the Maldivian Government and the British was triggered by this makeshift airport. That is due to the fact locals were facing difficulties in using the British-made runway, and their aircrafts for travel. When British refused to facilitate the travels requested by the Government.

A QUICK GLANCE AT THE HISTORY OF THE RUNWAY

Maldivians from across the nation came to Male’, and commenced work on a new asphalt runway at Hulhule’ during the 1960s. The runway made by the British using slotted steel was in operation during this time – aircrafts landing and taking off.

The first commercial landed at the runway built by the blood, sweat, and tears of Maldivians on April 10, 1962; an Air Ceylon flight. This runway was ultimately used for the 60 years which followed.

With the runway, Maldives officially opened ‘Hulhule’ Airport’ on April 12, 1966.

This runway, and the airport was further developed during former President Maumoon Abdul Gayyoom’s administration as tourism boomed and reopened on November 11, 1981.

Although Maldivians have bid goodbye to the old runway, it will remain close to our hearts.

Maldivians were the ones who stood up to put an end to difficulties faced by locals in air travel during British protectorate. Then-prime minister late Ibrahim Nasir led efforts to develop a runway made by the Maldivians in the Maldives, to rid of the British's slotted steel runway.

Despite having been an initiative to ease air travel for locals – the runway had served the nation as the main facilitator of tourist arrivals to the Maldives, effectively aiding the country’s economy and development.

The old runway will be utilized as a taxiway with the operationalization of the newly developed Code F runway.

Its operationalization will decrease the waiting time between landing flights from seven minutes to two minutes. The new runway can accommodate 21 flights per hour, the previous one having the capacity to accommodate just eight per hour.

This will effectively address one of the biggest complaints by airline operators to VIA; having to stall in air for a long time before being permitted to land, attributed to the busyness of the airport.

The new runway was developed by China’s Beijing Urban Construction Group (BUCG) during former president Abdulla Yameen Abdul Gayyoom’s administration. Physical works on the project commenced in 2017, with the project reaching full completion in 2018. Although test flights were conducted on the new runway in September 2018, it had remained as a taxiway till present due to terminal buildings being in close proximity to the runway which does not provide enough clearance to allow for takeoff and landings.

The First King of the Maldives

Victory Day through the lenses of Makunudhoo students