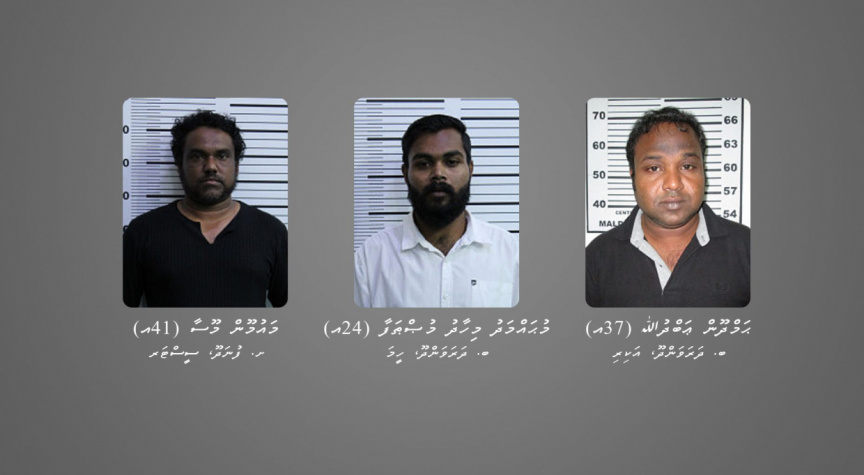 Five suspects have been arrested for recording multiple men, including several high-profile Maldivians, having sex with MD Alamgir, a Bangladesh national convicted of homosexuality, and using the recordings to blackmail and extort large sums of money.

Police said that of the five suspects arrested in the case, two were released by the court citing lack of stuffiest grounds to keep them in custody.

Police released the identities of the remaining three suspects Sunday. They are:

Maumoon was arrested on September 20. The court ordered for him to be remanded in custody of police for 10 days.

Police said that in addition to recording the videos and blackmailing and extorting the men, the suspects had also leaked some of the videos online.

Alamgir, 26, was arrested on July 12, after videos leaked online showing him engaging in sex with multiple men.

He was convicted of engaging in homosexuality back in August. He pled guilty to the charge and and received seven months in prison. He was later charged with 40 counts of production of pornographic content - to which he pled guilty on Saturday.

Meanwhile, Ahmed Nazim Abdul Sattar, a prominent lawyer and younger brother of Parliament speaker, former president Mohamed Nasheed, who was recorded on video having sex with Alamgir, was sentenced to three months and 26 days in home confinement on September 15.

Abdul Rahman Rafeeu, a former senior office at the Drug Enforcement Department (DED), was sentenced to one year, two months and 12 days in prison.

Both Nazim and Rafeeu had also pled guilty to the charge.