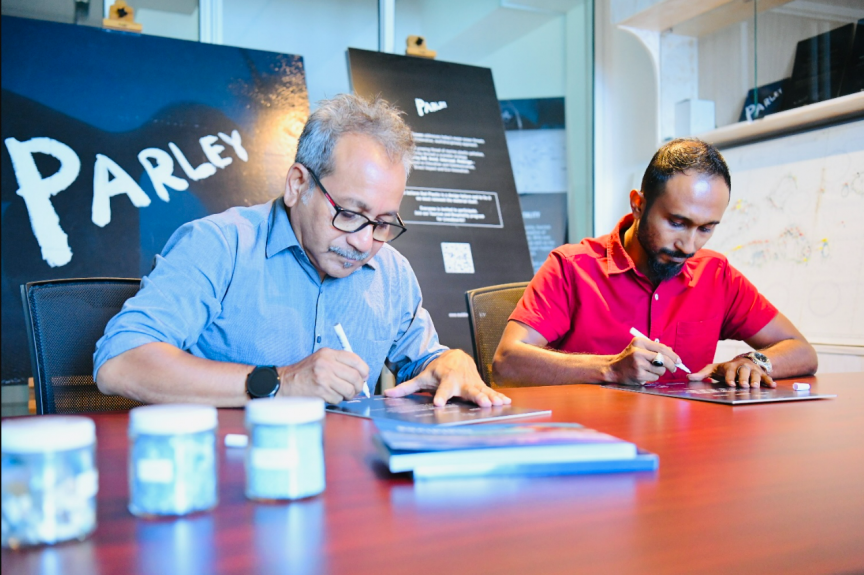 Parley Maldives and Pick Maldives on Sunday signed the ‘Parley AIR' pledge which supports the running of  Parley AIR Strategy in Maldives.

During a special ceremony held at the Parley Maldives office in Male’ City, the agreement was signed from Parley by founding member, former Planning Minister Hamdhoon Hameedh and founder of Pick Maldives Riaayath Abdul Majeed.

The Parley AIR – Avoid, Intercept, Redesign – is an initiative to end the growing threat of plastic pollution to the marine environment.

The organization has been working under this strategy with relevant government authorities,  local schools, businesses, island councils, resorts, cafés, restaurants, and communities across the nation since 2015.

Pick Maldives has been working on the promotion of the Maldivian tourism industry since 2017. They prepare and release special photobooks featuring Maldivian isles, which are delivered to corporate VIPs, journalists, celebrities and bloggers worldwide.

The edition to be released this year is linked to the Maldives’ celebration of the golden jubilee of tourism in the country. This edition includes information on Parley Maldives and the AIR strategy.

As an advocate for the preservation of the environment, Pick Maldives believes that aiding the promotion of the AIR strategy will prove to be a booster to them as well as Parley Maldives.

The Pick Maldives edition for the golden jubilee of Maldivian tourism is set to be to released on November 3, during the ‘Luxury Travel Fair’ held in London.

The fair will feature a stall of Pick Maldives, which is notably the only stand representing the country.