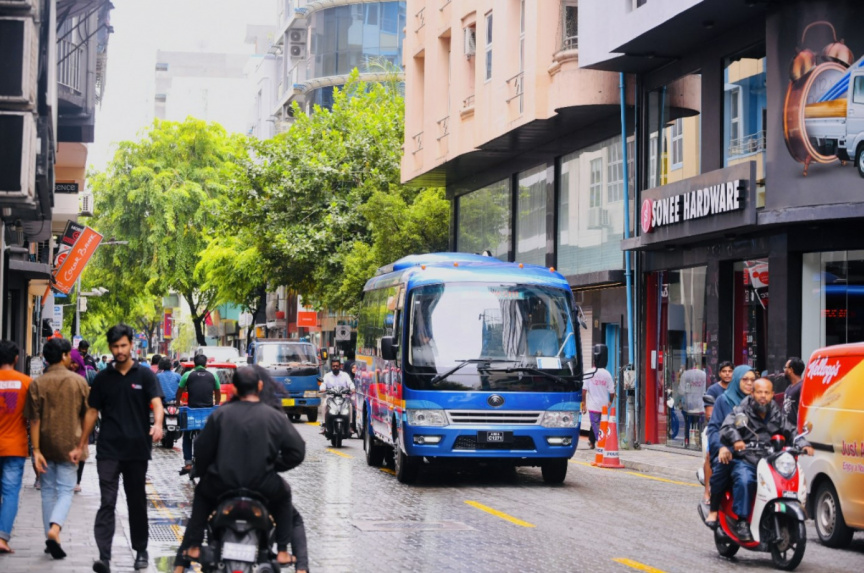 A minibus drives along a street in Male' City. (Sun Photo/Mohamed Naail)

Minibus service commenced in Male’ City on September 5, with commuting in the first two-weeks being free of charge. This period expired on Sunday, following which an extension of free service for additional two-weeks was announced.

Commenting regarding the matter, an official from Drivers Association of Maldives Ahmed Shamaal told Sun that the decision to provide minibus free of charge for additional two weeks was extremely concerning.

Stressing that income to taxi drivers have significantly decreased following the commencement of minibus service – Shamaal said that extension of the free service period by additional two weeks at such a period of time would further decrease taxi drivers’ income.

“At present, the bus travels however they want, whichever way is easier for them. With all these easements, extending the free service period is absolutely unacceptable to our association,” he added.

Shamaal said that all government authorities must take these matters into consideration, and the fact that taxi drivers are also people working to earn a living.

When minibus service first commenced – taxi drivers had reported a drop in their income as well increase in traffic with Male’ City. One week after the commencement of the service – Shamaal said that the income of taxi drivers had decreased by 35 percent to 45 percent.

A total of 2,257 passengers sought minibus service on the first day. By the end of first week, a total of 48,370 passengers had sought the service.