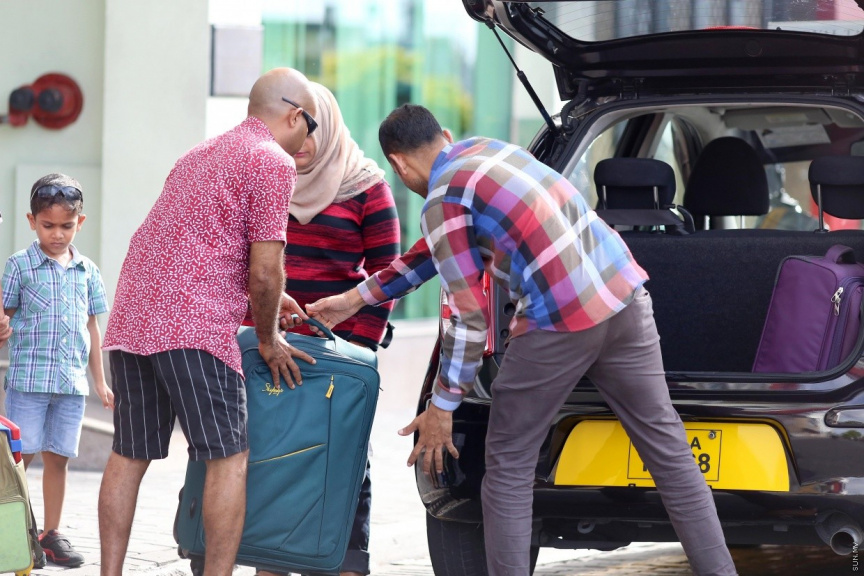 A taxi driver taking luggage from the trunk.

A week into commencing public transportation in Male’ City with minibus services, taxi drivers said that their income has greatly decreased.

The minibus services under Raajje Transport Link (RTL) operated by Maldives Transport Contracting Company (MTCC) have been used by thousands of Male’ citizens.

The services will be free for the first two weeks, and from then on MVR 7 will be charged per ride.

A taxi driver Ahmed Shamaal who advocates for the drivers rights said to Sun on Monday that their income has dropped on average by 35 - 45 percent.

He said that with the bus services being currently free, many use that to travel around Male’.

Moreover, Shamaal noted that previously, from Majeedhee Magu drivers will most often get customers. However, since numerous bus stops are located on this road, people opt not to wait for taxis.

“The roads are very congested. It is very difficult to drive. Since the roads get jammed, it is hard to call and get taxis. Even because of this people get on the bus.”

Another driver who spoke with Sun on the condition of anonymity said that previously on average MVR 1,500 can be earned between 06:00 till 19:00. However, the driver said that because of the buses the amount has dropped to MVR 1,300.

“Customers for morning and night are less now. There are customers in the evening. Compared to before, MVR 200 – 300 less now. That is also something, isn’t it?” said a driver who has been working in the field for over ten years.

Additionally, those who use taxi applications to gain customers also noted a drop in their earnings.

“By spending the day, can earn about a thousand before. But now earning about MVR 600 only.”

Only temporary, with fare collection, demand for buses will decline

Starting from September 19, a fare of MVR 7 will be charged. The only exception for this is those over 65 years old, children under three years, those with special needs upon presenting National Social Protection Agency (NSPA), as well as children in school uniforms.

For MVR 30, four people can travel in a taxi within Male’ City. For the same number of people, MVR 28 will be charged in total by the bus.

“Actually, [people are] now travelling because it is free. When they start charging, [I] don’t believe many will go. [I] believe the number of customers will increase then,” deliberated a driver while speaking with Sun.

Although people frequent taxis to commute to schools and officers, over the past week, many have shifted to using the bus.

The minibuses will be operating daily from 05:45 to 0:15, on three routes - Ameenee route, Soasan route, and Orchid route. Busses will be stopped at each stop once every 10 to 15 minutes. There are 40 bus stops.

Minibuses can accommodate 20-22 passengers seated and another 10 standing. A total of 18 buses will be operating in Male’, out of which eight have ramps and wheelchair access.