Formerly known for its goals, Atalanta relies on defense now 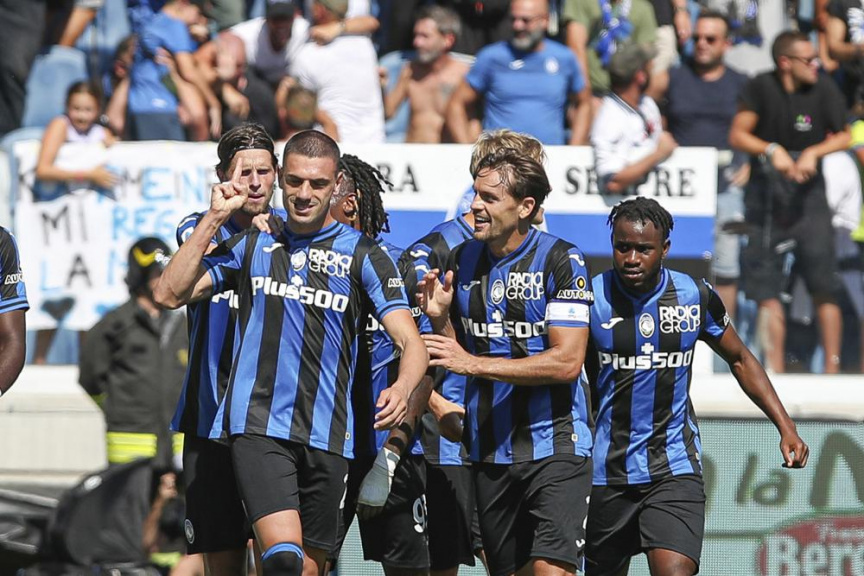 ROME (AP) — Atalanta, the team that drew praise and admiration around Europe in recent seasons for its free-flowing attack and abundance of goals, is relying more on its defense these days.

With Luis Muriel having just returned from injury and strike partner Duván Zapata likely out for another month, Atalanta hasn’t exactly resembled the unit that produced a whopping 98 goals a couple of years ago.

But with only three goals conceded through six matches, unbeaten Atalanta is the best in the league in that department.

Still, Atalanta wasted a chance to reclaim the Serie A lead when it was held to a 1-1 draw at home by promoted Cremonese on Sunday.

The result left Atalanta, which is not playing in Europe for the first time since 2016-17, second but level on points with leader Napoli and third-place AC Milan, the defending champion.

With 14 points, Atalanta has never done better through six rounds.

Elsewhere, Udinese moved up to fourth, one point behind the leaders, with a 3-1 comeback win at Sassuolo for its fourth straight victory.

Cremonese defender Emanuele Valeri equalized in the 78th off a rebound for his first goal in the top division, four minutes after center back Merih Demiral had put Atalanta ahead by redirecting a free kick from Teun Koopmeiners with a header.

“It’s regretful that we allowed that goal because of a mistake,” Atalanta coach Gian Piero Gasperini said. “We mostly dominated.”

Atalanta goalkeeper Juan Musso couldn’t hold on to the shot that led to Cremonese’s equalizer.

“His main problem is playing with his feet,” Gasperini said. “He’s always been a great ’keeper between the posts but he’s less sure with his feet. We’re working on that.”

Atalanta also had a goal disallowed by VAR after the hour mark when it was determined that Caleb Okoli had used his hand to deflect in a free kick from Koopmeiners.

Besides Demiral, who Atalanta bought from Juventus in June, Brazilian-born Italy international Rafael Tolói has been a mainstay in the Bergamo squad’s defense. Okoli, a center back in Italy’s under-21 squad, is making his Serie A debut this season after loans to SPAL and Cremonese.

Cremonese, playing in the top division for the first time in 26 years, had gained its first point last weekend against Sassuolo after opening the season with four straight losses.

Atalanta produced twice as many shots as Cremonese (14 to 7) and dominated the possession but had trouble finding the target.

Muriel appeared furious when he was removed before the hour mark in favor of Rasmus Højlund, the 19-year-old striker who Atalanta signed from Sturm Graz for 17 million euros ($17 million).

“When he’s not injured, he plays in all of the games,” Gasperini said of Muriel. “If he went to another team I think he would play less. But I understand that after so many years (at this level) you can be unsatisfied. It’s one of the things that needs to be resolved.”

Napoli beat Spezia 1-0 on Saturday and Milan won 2-1 at Sampdoria.

Juventus needed an injury-time equalizer from Leonardo Bonucci to secure a 2-2 draw with visiting Salernitana.

Bonucci scored off the rebound of his own penalty. Arkadiusz Milik then appeared to get the winner with a header but VAR wiped off the goal due to Bonucci being offside amid vehement protests from Juventus.

Antonio Candreva had put Salernitana ahead early on after Pasquale Mazzocchi dribbled by Weston McKennie to provide the cross.

Then Krzysztof Piątek doubled the lead with a penalty before the break after Gleison Bremer used his arm to deflect a shot by the Poland striker.

It marked the first time since 2004 under Marcello Lippi that Juventus trailed a Serie A home match by two or more goals at halftime.

Bremer pulled one back for Juventus after the break with a soaring header.

Still unbeaten but with only two wins, Juventus moved up to eighth, four points behind Napoli.

Having lost its opener at Paris Saint-Germain, Juventus hosts Benfica in the Champions League on Wednesday.

After humiliating José Mourinho’s Roma 4-0 last weekend, Udinese was again up to the task at 10-man Sassuolo, where Portuguese striker Beto scored twice off the bench and Lazar Samardžić also found the net after Davide Frattesi had given the hosts a 1-0 lead.

Udinese is one point ahead of Inter Milan, which it hosts next weekend. The Friuli squad’s only loss came in its season opener at Milan.

Silvio Berlusconi’s Monza earned its first-ever point in the top division with a 1-1 draw at Lecce that may have saved coach Giovanni Stroppa’s job.

A free kick from Stefano Sensi put Monza ahead before Joan Gonzàlez equalized for Lecce.

In a regional clash, Bologna beat visiting Fiorentina 2-1 with goals from Musa Barrow and Marko Arnautović in its first match since Siniša Mihajlović was fired.

Youth squad coach Luca Vigiani directed Bologna for the game, with Thiago Motta taking over the job from Monday.

Napoli beats Udinese to go 11 points clear in Serie A