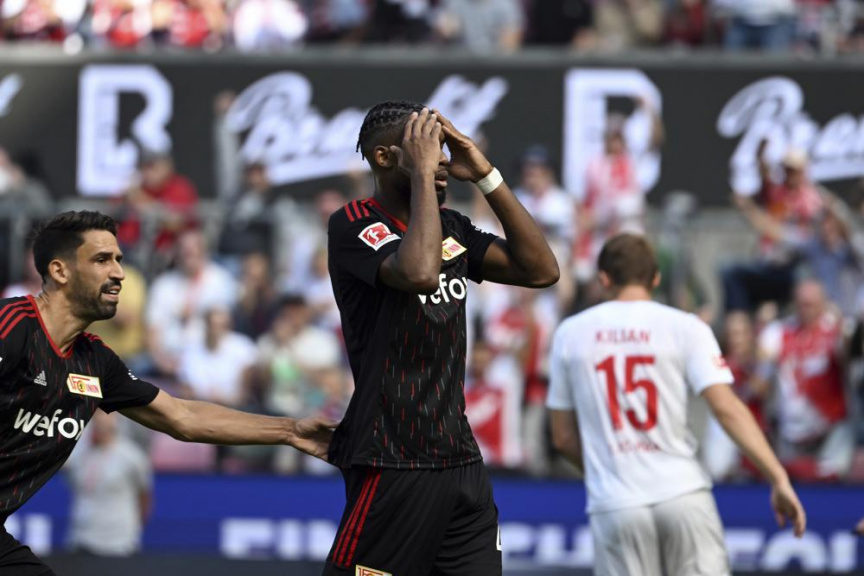 BERLIN (AP) — American forward Jordan Pefok had a penalty saved but Union Berlin held on to win 1-0 at previously unbeaten Cologne to move top of the Bundesliga for the first-ever time on Sunday.

“I haven’t seen a team play as well as Union here for a long time. You have to recognize that,” Cologne coach Steffen Baumgart said. “The plan we had didn’t work out at all.”

An own-goal from Cologne defender Timo Hübers in the third minute was enough for the capital club to finish first after the sixth round – one point ahead of Freiburg, which was held 0-0 by Borussia Mönchengladbach in the late game.

Hübers was trying to cut out Sheraldo Becker’s cross when he inadvertently diverted the ball inside goalkeeper Marvin Schwäbe’s near post.

Pefok was back in Union’s starting lineup after missing two games with a muscle injury. He had a chance to add to his two league goals so far when Cologne’s Luca Kilian was penalized for handball through VAR. The player didn’t even see the ball before it hit his arm. Justice was arguably served when Pefok shot down the middle and saw Schwäbe save his effort in the 10th minute.

Becker had another Union goal ruled out for offside shortly afterward, but it didn’t matter as the visitors played with discipline to see out their fourth win.

“I’m satisfied, a compliment to my team,” Union coach Urs Fischer said. “We wound it down without allowing Cologne to pose any danger.”

Kilian was sent off in the 81st with his second yellow card as Cologne slumped to its first loss.

Union, the only club in the Bundesliga to have played in the old East German league, was only promoted to the reunified country’s top division in 2019. Expected to promptly return to the second division, instead it has steadily improved, finishing 11th, seventh, then fifth last season to qualify for the Europa League.

Fischer and team captain Christopher Trimmel still say the aim this season is to avoid relegation.

“We’re on a run but we know there are many things that are not going so well,” Trimmel said. “I saw before the game that we’re the team with the least possession. But we’ve played Leipzig and Bayern so the statistics lie a bit.”

“There were phases today where we did very well. Our defensive work is a strength, but we need to do better playing with the ball,” Trimmel said.