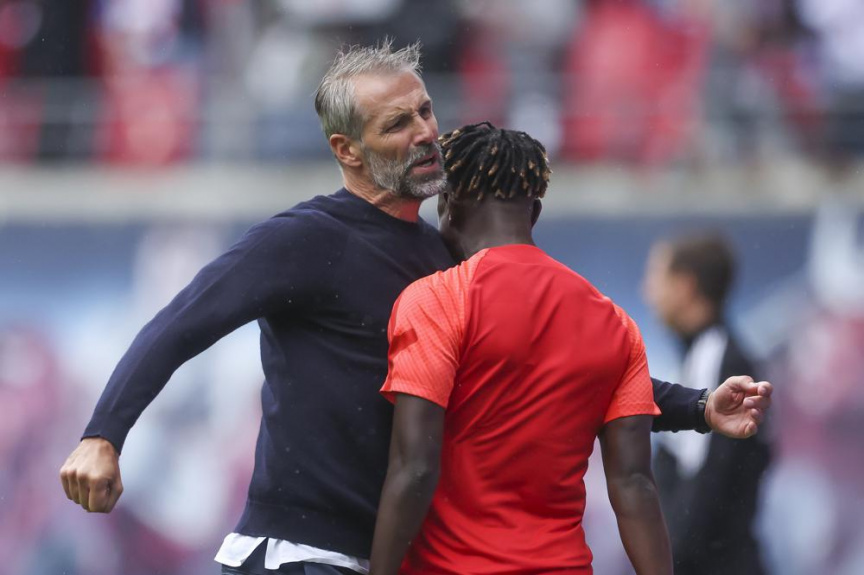 BERLIN (AP) — It was the perfect afternoon for new Leipzig coach Marco Rose. For Bayern Munich, not so much.

Two days after being hired by Leipzig, the 45-year-old Rose oversaw Saturday the team’s 3-0 rout of Borussia Dortmund, the club which fired him at the end of last season.

“It was a great year, I got to know great people, great fans,” Rose said. “It didn’t work out in the end, I had to go, but life goes on for me.”

Meanwhile, Bayern was held 2-2 by Stuttgart for its third straight Bundesliga draw.

Serhou Guirassy scored an injury-time penalty for Stuttgart in another blow for Bayern ahead of its Champions League group-stage game against Barcelona on Tuesday. Bayern drew its previous league games against Union Berlin and Borussia Mönchengladbach.

“Today I’m angry for the first time – at ourselves,” Bayern veteran Thomas Müller said. “I think we have to understand that if we want to win every game, and that’s what we want, that you have to go to the end.”

Rose takes Leipzig to Real Madrid on Wednesday in the Champions League after claiming a refreshing victory on his Leipzig debut. It was just Leipzig’s second win in six Bundesliga games. Rose was only appointed Leipzig coach a day after the club fired his predecessor Domenico Tedesco.

Will Orban got Rose’s team off to a great start in the sixth and Leipzig maintained its intensity until Dominik Szoboszlai made it 2-0 with a brilliant strike from distance before the break.

Dortmund improved after the interval. Edin Terzić increased his team’s offensive capability when he brought on Gio Reyna and Youssoufa Moukoko in the 59th, and Justin Njinmah, another forward, followed 10 minutes later.

But Amadou Haidara sealed Leipzig’s win in the 84th after Szoboszlai won the ball from Thomas Meunier and fed it to Timo Werner to set him up.

“It certainly wasn’t perfect yet, but we were intense, we gave something and took the stadium with us. I’m very happy,” Rose said.

Bayern was unable to profit much from Dortmund’s slip, though it looked fine when Mathys Tel opened the scoring in the 36th. Alphonso Davies cut the ball back for the French forward to become Bayern’s youngest Bundesliga goalscorer at 17 years and 136 days old.

Stuttgart’s Guirassy had an equalizer ruled out after the break through VAR for a foul by Chris Führich in the buildup. TV replays showed a slight tug on Joshua Kimmich’s shirt before Führich set up his teammate.

But Führich atoned by scoring in the 57th when Konstantinos Mavropanos intercepted Davies’ poor pass to play him through.

Then Jamal Musiala showed his skill with a sleight of foot to elude Atakan Karazor before sending the ball inside the left post on the hour-mark. It was the 19-year-old’s fourth goal in five league appearances.

VAR played a role again when Matthijs de Ligt was penalized in injury time. Guirassy stole the point for Stuttgart with the spot kick.

“In the second half we had three huge chances when you have to score the third goal, then the game is over,” Bayern coach Julian Nagelsmann said. “Then the opponent thinks something is on – and there was something on. There was a justified penalty and we only got 2-2.”

Bayer Leverkusen came back to draw at Hertha Berlin 2-2, but the home players were infuriated not to be awarded a late penalty when Jean-Paul Boetius saw his shot blocked by Leverkusen defender Odilon Kossounou’s arm.

Schalke defeated winless Bochum 3-1 in their derby, leaving the visitors with no points after six games and coach Thomas Reis under increasing pressure. It was promoted Schalke’s first win of the season.