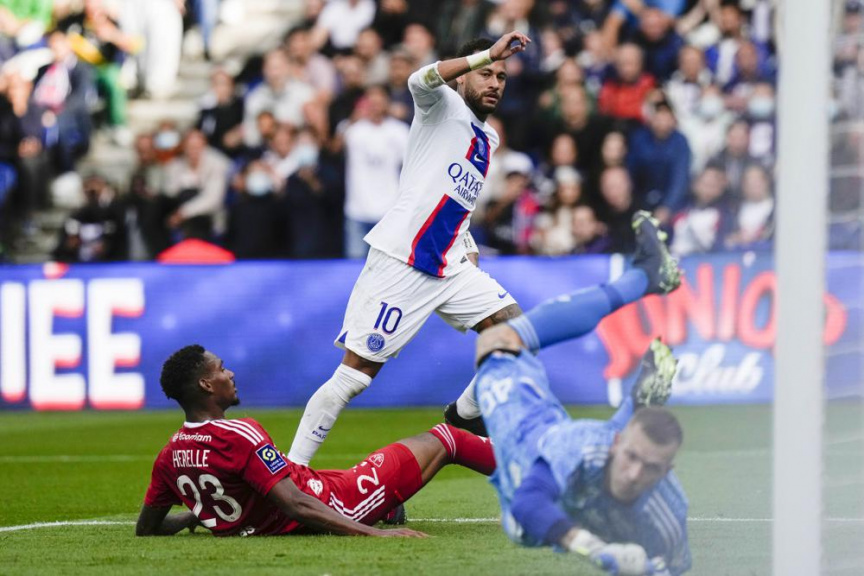 PARIS (AP) — The goals keep coming for Neymar at Paris Saint-Germain, and Gianluigi Donnarumma keeps stopping them at the other end.

The Brazil forward netted his eighth goal in seven French league games and Donnarumma parried away a penalty to lead PSG back to the top with a 1-0 win over Brest on Saturday.

Still unbeaten in all competitions ahead of Wednesday’s trip to Maccabi Haifa in the Champions League, PSG had briefly dropped to second place following Len’s 1-0 win against Troyes on Friday.

Christophe Galtier’s team moved back in charge with its sixth league win, level on points with second-place Marseille but having a better goal difference. Lens is in third place, two points behind the leading duo.

Marseille rallied to beat Lille 2-1 at the Stade Velodrome, bouncing back from its loss against Tottenham in the Champions League midweek. Defender Samuel Gigot volleyed home the winner in the 60th minute after Alexis Sanchez leveled for Marseille following Ismaily’s opener.

Galtier said he regretted that PSG players did not enjoy a more comfortable win and he criticized their “technical mistakes.” Galtier told French media that defender Presnel Kimpembe, who limped off the field near the end, would miss PSG’s next couple of matches because of a muscular lesion.

Neymar’s goal took him top outright in the scoring charts ahead of teammate Kylian Mbappé. With the World Cup looming later this year, the former Barcelona player has been in excellent form, with an additional six assists.

Neymar put the hosts in front in the 29th minute from Lionel Messi’s assist. The Argentine picked out his teammate perfectly with a lofted ball into the box that Neymar controlled with a soft touch before firing it home with a left-footed shot into the bottom right corner.

PSG’s formidable three-pronged attack of Mbappé, Neymar and Messi combined well throughout the game, with Brest second-best in all sectors of the field at the Parc des Princes. The trio created havoc near the hour mark with a succession of quick passes but Mbappé fluffed his shot and missed the target.

Mbappé had a goal disallowed before halftime for an offside position, and Messi came close to doubling PSG’s lead after the interval only to see his header from Mbappé‘s cross hit the post as Brest ’keeper Marco Bizot looked well beaten.

PSG could have been made to pay for its profligacy after Brest was awarded a soft penalty with 20 minutes left when Kimpembe was sanctioned for contact with Noah Fadiga. But Donnarumma got a firm hand to Islam Slimani’s effort from the spot.

Donnarumma was decisive again nine minutes later to stop another effort from Slimani, ensuring that the hosts stayed in command.

“It’s important to be able to suffer together,” Donnarumma said. “And today, we did it. We knew it would not be easy, and we had to suffer all together.”