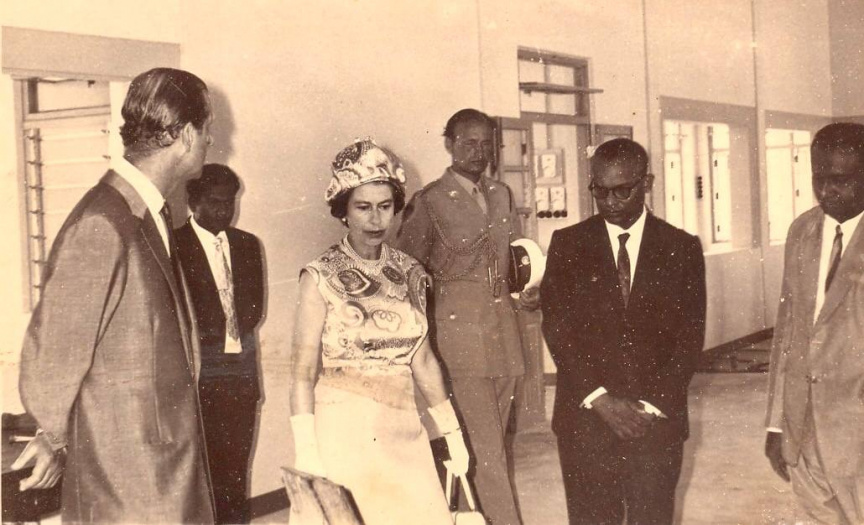 Queen Elizabeth II and the Duke during their visit to Maldives in 1972.

Maldives has joined the Commonwealth nations and other world nations in mourning the death of Britain’s Queen Elizabeth II on Thursday night.

Elizabeth, who had been on the throne since 1952, died Thursday night after 70 years on the throne at Balmoral Castle, her summer residence in Scotland. She was 96.

Following the news of her death, many British people gathered around the royal palace, Buckingham Palace, to pay their respects and to partake in mourning.

UK’s flag is being flown half-mast as well, alongside many other world nations including member countries of the Commonwealth, the United States.

In London and at military sites across the United Kingdom, special guns fired 96 shots in an elaborate, 16-minute salute marking each year of the queen’s life.

As the country began a 10-day mourning period, people around the globe gathered at British embassies to pay homage to the queen.

The President of Maldives, Ibrahim Mohamed Solih, joined in offering condolences to the members of the royal family, the people of UK and the Commonwealth.

“Her Majesty the Queen was a shining example of public service, resilience and devotion to one’s country and the greater community of nations,” he said in a tweet.

President Solih also recalled the Queen’s official visit to the Maldives on March 13, 1972.

He also declared three days of national mourning in the Maldives, during which the Maldivian flag will be flown at half-mast.

Elizabeth passed away on Thursday night, mere hours after Buckingham Palace announced that she was brought under medical supervision as doctors expressed concerns for her health. Subsequently, members of the royal family had rushed to her side at Balmoral Castle including her children and grandchildren.

Her 73-year-old son Prince Charles automatically became king upon her death and will be known as King Charles III, his office announced. Charles’ second wife, Camilla, will be known as the Queen Consort.