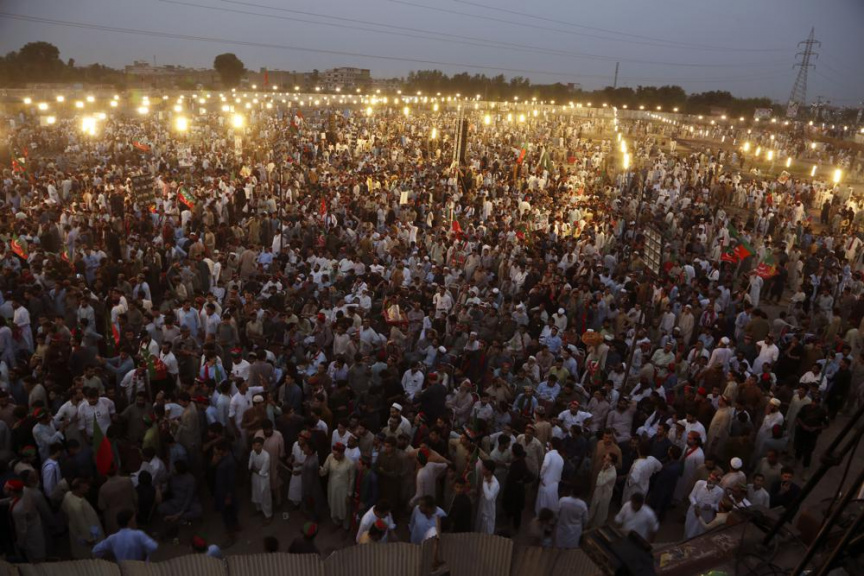 ISLAMABAD (AP) — Since he was toppled by parliament five months ago, former Prime Minister Imran Khan has demonstrated his continued popularity with mass rallies across Pakistan, signaling to his rivals that he remains a considerable political force.

On Tuesday, he addressed some 25,000 supporters in the northwestern city of Peshawar, the capital of deeply conservative Khyber Pakhtunkhwa province bordering Afghanistan.

Khan said he would soon organize a mass march to the capital, as a culmination of his campaign to force the government of Prime Minister Shahbaz Sharif to hold a snap election, which some analysts say Khan might win due a groundswell of support.

“I will soon give you a call for a march on Islamabad,” Khan told the cheering crowd, then asked: “Are you ready for it?”

“Yes,” came the response from his supporters.

Sharif has rejected the demand for early elections, saying the vote should take place as scheduled in 2023.

As during previous rallies, Tuesday’s speech was not shown live by TV stations on instructions from the country’s media regulatory agency. The regulators have banned broadcasting his live speeches, purportedly because of his recent critical remarks about the military and judiciary. Viewers also had difficulty accessing the speech via YouTube and other social media.

Since his ouster, Khan has claimed that the current government came into power under a plot by the U.S. which allegedly disagreed with his more independent foreign policy; Washington has denied such a claim.

Khan had served as prime minister for over three-and-a-half years until he was brought down by an alliance of political parties in a parliamentary no-confidence vote in April.

In a new twist to his comeback campaign, the former cricket star-turned-Islamist politician faces terrorism charges for allegedly threatening police and a judge at a rally last month in Islamabad. At the time, Khan sharply criticized the authorities for having arrested his close aide Shahbaz Gill on charges of inciting troops to mutiny against top army generals.

Khan could face several years in prison under Pakistan’s 1997 anti-terrorism law, which grants police wider powers. He is currently on a type of bail that shields him from arrest until Sept. 12.

“Look, a terrorist is standing in front of you,” Khan sarcastically told the crowd Tuesday evening.

Analysts say that even in the opposition, Khan remains a political force.

In Tuesday’s speech, Khan again attacked Washington, saying his removal from office was the result of a U.S.-organized plot and collusion with Sharif. Both have denied the allegation.

Khan said Pakistan should not allow its soil to be used for attacks against any country.

His comments come amid reports that the U.S. drones were using Pakistan’s air space for surveillance in neighboring Afghanistan, where the Afghan Taliban seized power last year.

Khan is a vocal critic of military operations.

Even before coming to power, he called for the resolution of the Afghan issue through peace talks. Addressing the United States on Tuesday, he said he wants friendship with Washington, but that “we will not accept your slavery.”

Khan has said in recent months that the United States wanted him gone because of his foreign policy choices in favor of Russia and China, and a visit he made on Feb. 24 to Moscow, where he held talks with Russian President Vladimir Putin as Russian tanks rolled into Ukraine.

Khan has said he was not aware that the Russian invasion of Ukraine would start during his visit.

After coming to power in 2018, Khan initially enjoyed excellent ties with the military.

His troubles began when he resisted the appointment of a new spy chief by the army chief Gen. Qamar Javed Bajwa.

Although the issue was later resolved, analysts say Khan and Bajwa never repaired the relationship and that Khan still believes Bajwa was part of the alleged plot to topple him.

Khan claimed Tuesday that his political opponents tried to drive a wedge between him and the army which traditionally plays an out-sized role in Pakistan politics.

Donors offer over $9B for Pakistan after deadly floods