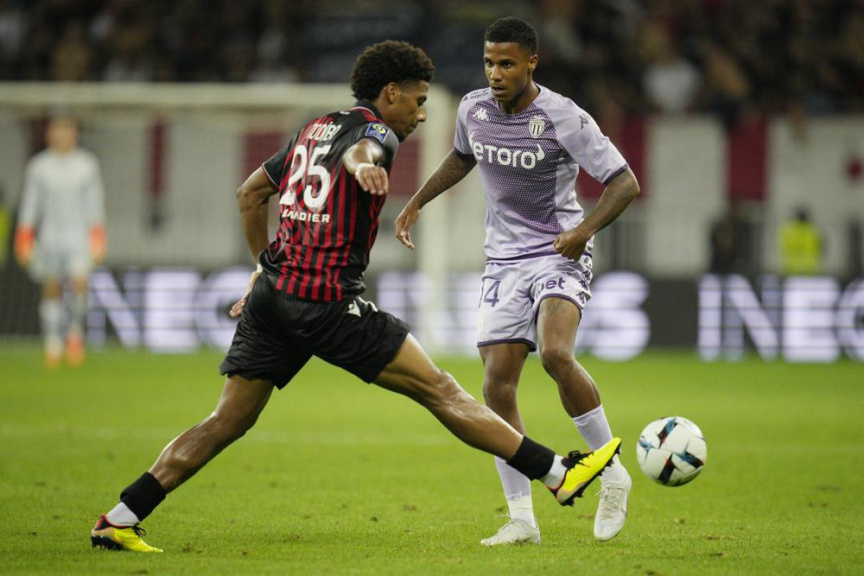 Monaco's Ismail Jakobs, right, and Nice's Jordan Lotomba challenge for the ball during the League One soccer match between Nice and Monaco at the Allianz Riviera stadium in Nice, Sunday, Sept. 4, 2022. (AP Photo/Daniel Cole)

PARIS (AP) — Already struggling with 11 players, Montpellier was undone by the sending off of Valere Germain just before half-time and slumped to a 3-1 home loss against Lille in the French league on Sunday.

Depleted by injuries and suspensions, Montpellier struggled throughout the first half at La Mosson stadium but was lucky to open the scoring against the run of play after 20 minutes when Elye Wahi used a clever lob to beat goalkeeper Leo Jardim.

Before that, Lille hit the woodwork twice and dominated proceedings. The northern side kept pushing and got a deserved equalizer four minutes before the break as Canada forward Jonathan David converted an assist from Remy Cabella into the far corner.

Cabella, who won the French league title with Montpellier back in 2012, was not expected to play but shook off a thigh injury to start and torment his former team in front of a hostile crowd.

The turning point came deep into added time of the first half when Germain received a straight red card for a reckless foul from behind on Adam Ounas.

As a result, the second half was even more lopsided. Lille monopolized the ball and turned its dominance into a second goal in the 57th, with Cabella delivering another decisive pass to Angel Gomes. David then completed a brace in added time with a left-footed angled shot, taking his season’s tally to four.

Following its 3-0 win at Nantes on Saturday, PSG leads the standings level on points with Marseille but with a better goal difference.

Openda’s equalizer from Florian Sotoca’s assist in a 1-1 draw at Reims came nine minutes from time after Folarin Balogun had put the hosts in front in the 70th minute. Lens went one goal down soon after Colombian defender Deiver Machado was sent off for a foul on Junya Ito.

Also reduced to 10 men — for an hour — Strasbourg managed to secure a 1-1 draw at Brest. Elsewhere, Clermont beat Toulouse 2-0 and Lorient won 1-0 at last-place Ajaccio.

Breel Embolo scored the only goal in a match of few chances as Monaco got back to winning ways with a 1-0 win at local rival Nice.

Embolo beat Nice goalkeeper Kasper Schmeichel in the 69th minute with a fine header from Caio Henrique’s precise cross to seal Monaco’s second win of the season. The Principality side moved up to 10th, three points above Nice.