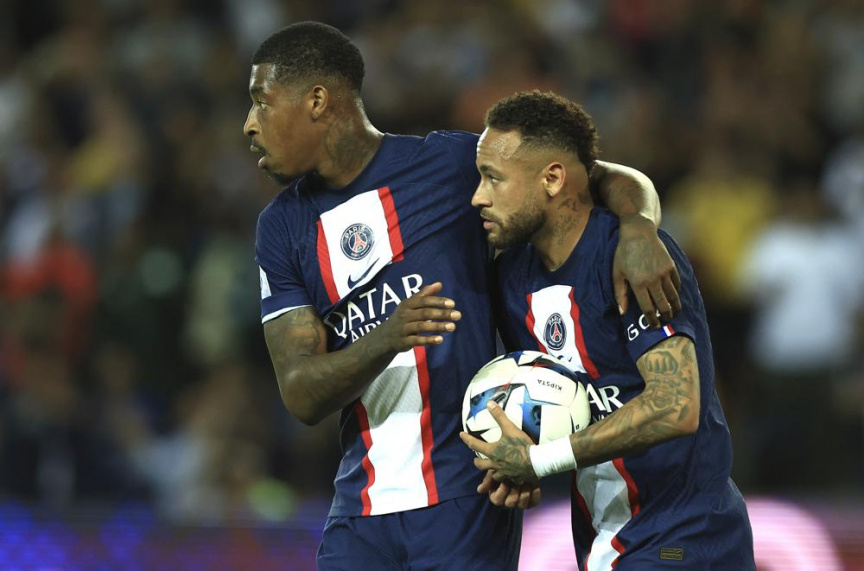 PARIS (AP) — Neymar won and scored a penalty as Paris Saint-Germain rallied to draw 1-1 at home to Monaco and stay in first place in the French league on Sunday.

Neymar latched onto Lionel Messi’s pass down the left and cut inside central defender Guillermo Maripan, who appeared to catch him with an outstretched leg.

The referee waved away PSG’s penalty claims but then awarded the kick following a video review. Neymar used his usual staggered run-up to confuse goalkeeper Alexander Nuebel before casually guiding the ball inside the left post. It was Neymar’s sixth goal in the league and eighth goal in five games overall.

PSG has 10 points and leads on goal difference from bitter rival Marseille and northern side Lens.

Monaco rode its luck at times but closed down PSG well early on, denying space to its famed attacking trio of Lionel Messi, Neymar and Kylian Mbappe, then took the lead in the 20th.

After recent signing Mohamed Camara tackled Messi near the halfway line, Russia midfielder Aleksandr Golovin sent a pass into the path of German striker Kevin Volland, who held off central defender Presnel Kimpembe before striking a low shot into the bottom right corner.

PSG’s strike force had netted 17 league goals in the three previous league games under new coach Christophe Galtier, but did not hit the target until Mbappe’s tame shot in the 37th.

“They closed us down well,” PSG captain Marquinhos said. “They stopped us bringing the ball out from the back.”

PSG then struck the post twice in first-half injury time, with Messi’s curler from 20 meters clipping the left upright and bouncing to Mbappe, who rushed his shot and hit the base of the right post.

Marquinhos conceded a clumsy corner right at the start of the second half and, minutes later, Monaco striker Wissam Ben Yedder went close with a lob for 12th-place Monaco after goalkeeper Gianluigi Donnarumma rushed off his line.

Nuebel made a fine stop to deny Neymar in the 59th but was well beaten on his penalty.

Marseille has made a strong start under Tudor, who is known as a disciplinarian and whose appointment was questioned by fans — especially when he left veteran playmaker Dimitri Payet out of the first three games.

But Tudor is winning the fans over with a high-octane brand of pressing soccer. He also said he’d give the 35-year-old Payet games. This time, he started him playing just behind Sanchez — a much-heralded signing from Italian champion Inter Milan.

The Chile forward grabbed his first goal in the 10th minute and, after former Arsenal fullback Nuno Tavares made it three goals in four games this season, Tavares combined with Payet to help set up Sanchez’s second goal in the 42nd.

Marseille was not the only side scoring freely away from home, with Montpellier netting five first-half goals in a 7-0 victory at Brest.

It was a stinging defeat for Brest coach Michel Der Zakarian, who played 10 years for the club as a defender and coached it from 2017-21.

Promoted Toulouse led early with a goal from midfielder Zakaria Aboukhlal but conceded three second-half goals in a 3-1 loss at midtable Nantes.

Elsewhere, Troyes beat Angers 3-1 in a scrap between lowly sides.